A FOND ADIEU TO THE INTELLECTUAL PROPERTY APPELLATE BOARD (IPAB) 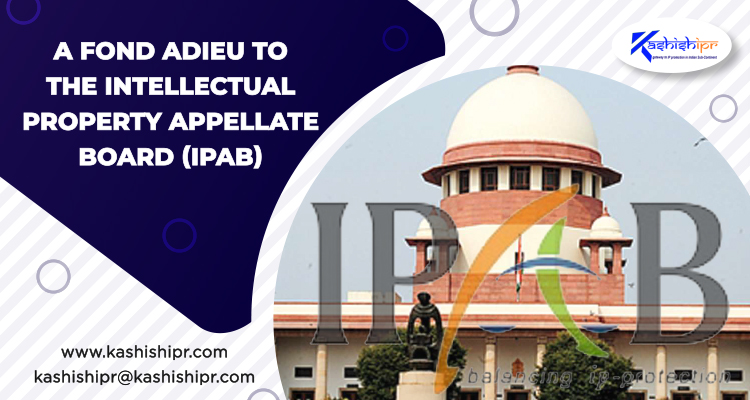 Behind the establishment of the IPAB

The Intellectual Property Appellate Board (hereinafter, the IPAB) was brought into being through a gazetted notification of the Central Government by the Ministry of Commerce and Industry on 15th September 2003 to hear appeals against the decisions of the Registrar under the IPR laws, namely, The Trade Marks Act, 1999 and The Geographical Indications of Goods (Registration and Protection) Act, 1999.

The IPAB was established to accelerate the process of dispute resolution of matters pertaining to the specialized field of Intellectual Property (IP) by unburdening the High Courts and imposing an unbending timeline of three months to admit matters in appeal.

Disputes emanating from IP were being adjudicated, apparently, in a speedy fashion. However, matters demanding specialized or technical evaluation were an exception to the aforementioned, as was also observed in the case of Novartis AG vs. Controller General of Patents. Unavailability of specialized members and experts and inability to constitute the required forum under the IPAB led to an increase in the pendency of suits, estimated to at least 2626 trademark cases, 617 patent cases, 691 copyright cases, and 01 geographical indication case as of April 2020. However, since the responsibility of filling out vacancies lies at the heart and hands of the government, the backlash faced by the IPAB may seem a little unjustified.

Scrapping of the IPAB

The Tribunals Reforms (Rationalisation and Conditions of Service) Bill, 2021 could not be brought up during the Budget Sessions, 2021, and therefore, the Centre, through the powers vested in it by Article 123 of the Constitution, introduced the Ordinance, which made changes in the Finance Act, 2017. The Finance Act marked the first step of streamlining tribunals in India by merging pre-existent tribunals based on the similarity of work.

Through the promulgation of an Ordinance, namely the Tribunals Reforms (Rationalisation and Conditions of Service) Ordinance, 2021, published in the Gazette of India dated April 4, 2021 (the ‘Ordinance’) – the IPAB was divested of its original and appellate jurisdiction in matters concerning trademarks, patents, copyright, and geographical indications. In addition to the IPAB, it has also annihilated the Plant Varieties Protection Appellate Tribunal under the Protection of Plant Varieties and Farmers’ Rights Act, 2001. The rationale behind such a drastic modification can be found in the Statement of Objects and Reasons appended to the Bill tabled before the Legislative Houses, which states that the IPAB, including others, shall be abolished since the same does not substantially ward of the workload of the High Courts, given the above-mentioned statistics. Furthermore, the matters of adjudication do not affect people at large; or the public is not a litigant to such issues.

It is worthy of pointing out that the Government of India sought to rationalize tribunals in the year 2015. The tribunalisation of justice was checked out way before the accomplishment of the objectives, due to which it came into being in the name of benefiting the public, reducing the burden on the public exchequer, and remedying the administrative and infrastructural lagging of these tribunals.

The Ordinance resuming effect from April 4, 2021, states that all appeals against the decisions of the Registrar of Trademarks, the Registrar of Geographical Indications, and the Controller of Patents would now be filed before the concerned High Courts and appeals against the decision of the Registrar of Copyright would be filed before the concerned Commercial Courts, including the Commercial Division of the High Courts. Litigations pending before the IPAB have also been transferred to the respective High Courts and Commercial Courts. It is difficult to contemplate as to how such matters will be adjudicated in the absence of experts or technical, administrative support, especially concerning patents. The Ordinance is also silent on appointing such experts.

On the brighter side, this can also be contemplated as a cause leading to the reduction of legal costs for the litigants. Due to lesser stratification in the hierarchy of adjudicating bodies, the time spent in dispute redressal of such litigants will also be reduced as there will be no need to challenge the IPAB’s orders by way of Writ Petitions before the concerned High Courts since a direct appeal will now lie before the High Courts.

However, at the offset, the issue of extended timelines and delays due to procedural formalities will remain a harsh and unresolved reality unless specific guidelines are adopted. The already burdened courts will encounter additional poundage. Furthermore, it may invite administrative issues, including arriving at a common ground on various IP-related matters since the order of one High Court is not binding on the other. Such instability may cause hindrance in developing a sound scientific temper as also enshrined in the Constitution.

Since the issue of speedy redressal remains unresolved, and the issue has again circled back to where it started from, it would be interesting to observe whether any improvements or additional measures or guidelines will be adopted to facilitate quick adjudication of disputes requiring specialized knowledge and skill. Only after undergoing the test of time can an assessment be drawn corresponding to whether this was a progressive stance in the right direction or against the National IPR Policy of 2016 intended to proffer speedy liquidation of backlogs. ✅ For more visit: https://www.kashishipr.com/