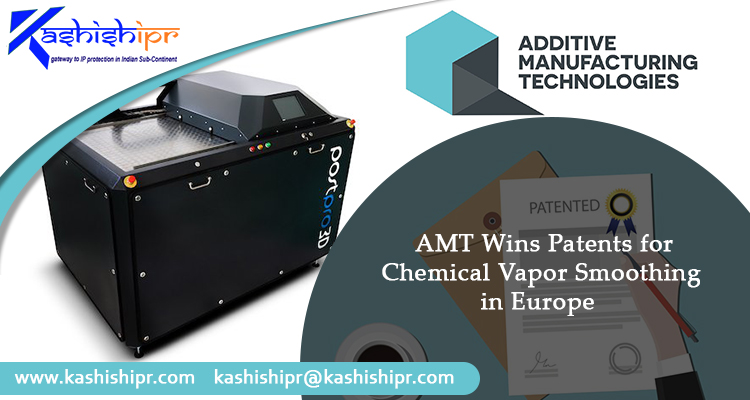 AMT (Additive Manufacturing Technologies – the global leader specializing in the safe and sustainable post-processing solutions of additively manufactured parts) has quite recently got its core portfolio of patents for chemical vapor smoothing granted.

AMT’s patents focus on the novel and inventive apparatus, which is used in the chemical vapor smoothing of thermoplastic polymer parts produced from composite, flexible, and rigid subsets, like thermoplastic polyurethane, polyamide, and glass-filled derivatives, along with the newly announced polypropylene.

Significantly, the IP enables multiple consumables to be used to process the parts, which, in turn, allows AMT to remain flexible corresponding to new regulatory requirements and material offerings.

AMT’s patents are granted after its five years of research and development at the University of Sheffield (UK), along with the extensive commercialization of its PostPro3D machines with its global network of partners. The patents granted highlight the fact that AMT’s PostPro3D is indeed a differentiated and unique technology.

The CEO of AMT, Joseph Crabtree, mentioned in a recent statement delivered that the company is fulfilling all of its goals with one milestone at a time and a clear vision for the future. According to Crabtree, PostPro3D is a decided leader in fully sustainable, safe, and automated surface finishing systems for all the applications and materials in the industry. He further said that it is indeed terrific to see that AMT has efficiently secured its core patents after many years of hard work and development. He believes that AMT is recognized in the market for its unique inventions, and its overall strategy is undoubtedly based around its strong IP position.

AMT keeps collaborating closely with its partners and customers to maximize the delivered value to the industry and shall continue searching for solutions in the future as well to bring additive manufacturing a step closer to an industry-wide accepted manufacturing solution. For more visit: https://www.kashishipr.com/