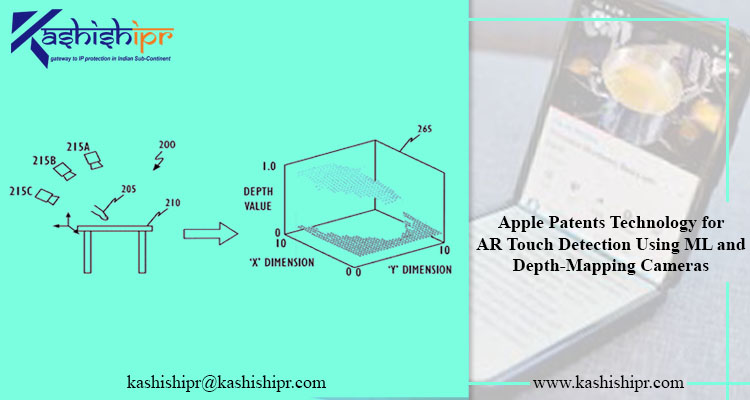 As the iPad and iPhone have mostly demonstrated to a great extent, much of Apple’s hardware nowadays relies heavily on accurate detection of direct touch inputs, such as a finger resting against a screen, or on a trackpad, in Mac’s case. However, as people across the globe depend on augmented reality for both entertainment and work, they require interacting with digital objects that aren’t equipped with physical touch sensors. Quite recently, Apple has patented a prime technique for detecting touch using Machine Learning (ML) and depth-mapping cameras.

As per patent standards, Apple’s technology in the depth-based touch detection system is pretty straightforward – the external cameras work together in a live or real-time environment for creating a three-dimensional depth map by measuring the distance of an object, for instance – a finger, from a touchable surface and then further determining when the object touches the surface. Crucially, the distance measured is designed in a way so that it becomes usable even when the cameras change their position, depending partly on training from an ML-based model to discern touch inputs.

Illustrations of the technique corresponding to Apple’s patented technology demonstrate three external cameras working together for determining the relative position of a finger, which is a concept that might turn out to be somewhat known to the users of Apple’s triple-camera iPhone 11 Pro models. Similar multi-camera arrays are most likely to appear in the future devices of Apple, such as the new dedicated AR glasses and iPad Pros, allowing each to determine finger input conveniently by applying ML knowledge and depth-mapping a scene to analyze the intent of changes in the finger’s position.

Equipped with this technology, AR glasses in the future could efficiently eliminate the need for trackpads and physical keyboards by replacing them with digital versions, which only a user can see and further interact with adequately. Such AR glasses could also enable user interfaces to be anchored to other surfaces like walls, creating a secure elevator conceivably that could only be operated or brought to particular floors with the help of the AR buttons.

Apple has been granted the patent US10,572,072 corresponding to the AR touch detection technology – invented by Sunnyvale-based Daniel Kurz and Lejing Wang. Apple had first filed the Patent Application at the end of September in 2017. Tim Cook, Apple’s CEO, has suggested that AR will be of the utmost importance for the tech giant to move forward in the present highly competitive world. For more visit: https://www.kashishipr.com/