Biocept Inc Receives Patent for its Primer-Switch Technology in Australia 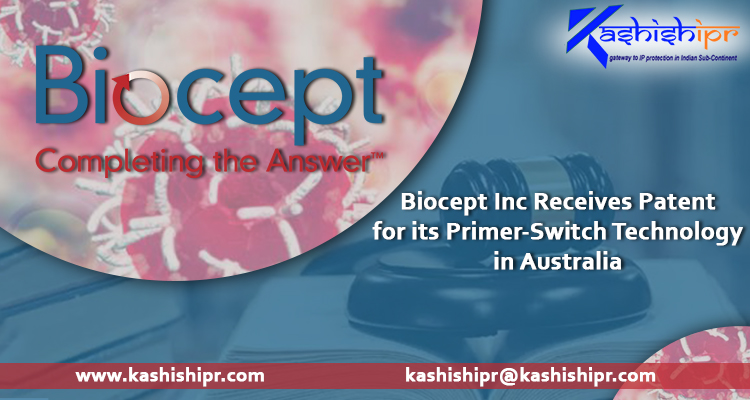 Biocept Inc., (a San Diego-based commercial-stage cancer diagnostics company providing liquid biopsy tests for doctors and their patients with cancer) has quite recently won a new patent in Australia. The granted patent provides Intellectual Property (IP) Protection to Biocept’s Primer-Switch technology that is efficient and useful in performing ctDNA (circulating tumor DNA) analysis with the help of real-time PCR and associated analysis methods, such as next-generation sequencing (NGS).

The chief scientific officer at Biocept, Lyle Arnold, stated that the grant of the new patent expands the company’s robust IP protection for rare mutation detection. He further said that the Primer-Switch is a method capable of detecting the rare genetic events, and is an addition to Biocept’s Switch-Blocker technology, which is used in a routine with the company’s ctDNA Target Selector assays.

Arnold mentioned that it is indeed the first patent issued for Biocept’s Primer-Switch technology, which the company believes would end up achieving worldwide Patent Protection. He also added that the granted patent is now another tool in Biocept’s toolkit of methods, which shall inform on biomarkers to help physician decision-making in the treatment of cancer patients. Moreover, the company explained that the Australian patent describes another exclusive method for particularly enriching patient specimens for oncogene mutations of interest.

The Primer-Switch technology is proactively used as a critical part of PCR reactions, which are integral to the most commonly-used method of amplification in diagnostic assays. The Primer-Switch methodology holds immense potential for finding diverse use in PCR reactions, specifically, in scenarios where there is a need to detect rare genetic events or have way more precise PCR amplification.

Michael Nall, the CEO at Biocept Inc, stated that the expansion of Biocept’s IP would continue to be the global validation of its technology, which, in turn, would position the company as a provider of cutting-edge approaches to detect rare genetic events with the help of blood and other fluids. He also said that Biocept would keep coming up with innovative technologies and products like Primer-Switch to stay ahead of the curve in liquid biopsy technology. For more visit: https://www.kashishipr.com/