Can GUIs be Secured As Industrial Designs in India? 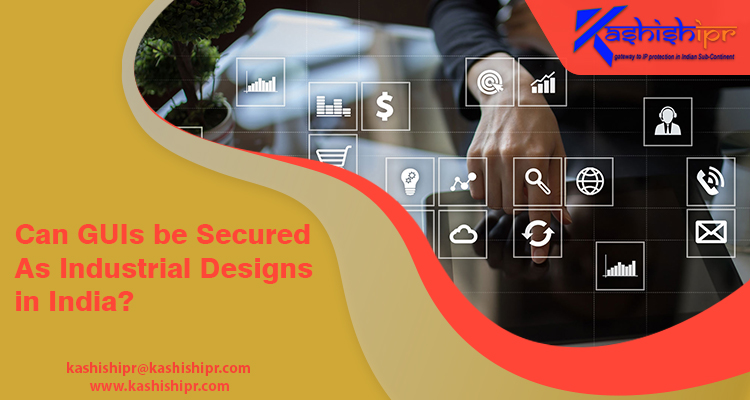 In today’s fast-paced global economy, most businesses rely heavily on the internet for their virtual survival when it comes to selling goods and services. Graphical User Interface (GUI) that is a part of our everyday life appears critical while creating the precise user experience to attract and keep the consumers interested. As a consequence, GUIs have become valuable Intellectual Property (IP) assets, often representing a company’s goodwill and brand identity.

GUIs or Graphical User Interfaces refer to the tools for man-machine interaction. These include simple icons, menus, etc., used in operating systems to control the devices and develop a method to interact with the computer or other electronic gadgets. The ‘look and feel’ is often functional and helps in customer engagement by the eye-pleasing appearance that leads to differentiation of products and services. Nevertheless, the technological advancements have gradually reduced the differences amongst similar electronic products, and thus, developed and raised the need for the protection of GUIs. Now, the question arises whether or not these GUIs are offered any protection as a form of IP or under IP laws. Well, by virtue of modern commerce, different nations view GUIs and their protection in different ways. For instance, many countries like the USA, Brazil, South Africa, etc., offer provisions to secure GUIs under one or the other form of Design Patent Protection. However, the Indian Design Office is reluctant to register them under Industrial Design Patent in India even when the Designs Act 2002 recognizes the GUI’s protection. The argument is:

GUI cannot be regarded as an article of manufacture, and thus, is disqualified as a design under Act 2002. Nonetheless, it can be argued that the Design Rules, 2001 under its Third Schedule provided for the classification of designs and articles, allows Industrial Design Registration for GUIs. This Third Schedule was then amended in 2008 to comply with the Locarno Classification, and according to the new classification of goods, class 14-04 was dedicated to things belonging to “Screen Displays and Icons.”

As per many reports, the Indian Design Office, till 2009, did grant some registrations to companies like Microsoft Corporation for icons and screen displays under Class 14-99. Nevertheless, the Office lately appears to have claimed that under Section 2(a) and 2(d) of the Designs Act, GUIs do not qualify as designs. Hence, these are not eligible for Industrial Design Protection in India.

Well, the interpretation of the legal provision hasn’t been without dispute. To know and understand how the interpretation led to disputes, let’s go through an example. A few years ago, in the decision issued by the administrator in a case involving Amazon Technologies, class 14-02 of the Design Act came under fire. The disputed registration case pertained to a GUI for providing supplemental information of a digital work to a screen. The Office, in its objections, noted that the proposed design could not be defined as a design under section 2(a) and 2(d) of the Designs Act, 2000. This case drew attention to the below-stated two provisions:

Administrators at the Indian Design Office, while refusing any application for Registration of Industrial Design in India, tend to make several observations. To comprehend what they often observe, let’s see why they refused Amazon’s application:

In the light of the decision passed in the matter of Amazon, it seems obvious that the fate of applications related to registration of GUIs as industrial design in India is uncertain until there’s more clarity on the two vital terms – article and design. In addition to Amazon’s, many other cases, especially one, which is related to a published design registration for ‘GUI for An Account Identifier’ under Class-99-01, have created a stir to the subject of GUI’s registration in India. However, it is still to be seen if this registration is of one of a kind or would set the trend for GUIs’ Design Registration in India.

Note: According to the Ministry of Electronics and Information Technology, GUIs can be secured by obtaining Copyright Protection as an alternative. But the enforceability and extent of copyright protection are yet ambiguous. For more visit: https://www.kashishipr.com/