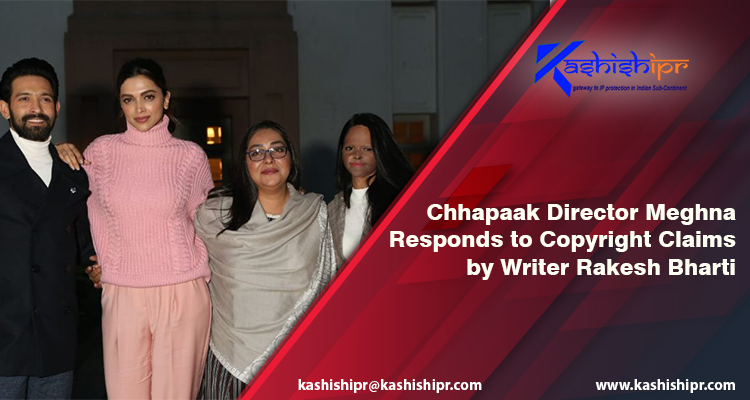 Director of the movie Chhapaak Meghna Gulzar has recently filed an affidavit against writer Rakesh Bharti in response to copyright violation charges. In her response filed before Bombay High Court (HC), she said that copyright couldn’t be claimed on true events and sought dismissal of the lawsuit seeking a stay on Chhapaak’s release scheduled to be held on January 10, 2020.

Writer Rakesh Bharti had filed a Copyright Infringement lawsuit against director Meghna Gulzar and actress Deepika Padukone in association with their upcoming film Chhapaak in which the actress plays the role of an acid attack survivor. Based on the story of the life of an acid attack survivor named Laxmi Agarwal, the said film revolves around Malti and her struggle not just to find justice but also for self-acceptance, courage, and love for life after a 32-year-old man poured acid on her face for rejecting his proposal when she was just 15.

Rakesh claimed that he, along with his son, had acquired rights to bring the real-life story of an acid attack survivor on the celluloid and that they had registered their film with the name Black Day in 2015. He added that they had shared a copy of their script with executives at Ka productions, Mriga Films, and Fox Star Studio, but found that the makers were already planning for the film separately. He also alleged that they finally wrote to the director in the year 2017, but she didn’t reply. It’s the said copyright violation allegation in response to which the director has filed an affidavit against the writer at the Bombay High Court.

The affidavit filed by the director through Naik Naik and Company stated that the lawsuit filed by Rakesh Bharti is ‘wholly misconceived, frivolous, legally untenable, and unmeritorious.’ In detail, it stated that:

Furthermore, Gulzar, in her affidavit, asserted that Copyright Protection could not be extended to facts available in the public domain and events, which have factually transpired. The affidavit also pointed out that the suit didn’t specify how the story of the writer’s film and Chhapaak movie was the same.

Meanwhile, the movie Chhapaak slated to release on January 10 is just a few days away from hitting the screens, the result of the hearing associated with this matter is yet to come. For more visit: https://www.kashishipr.com/