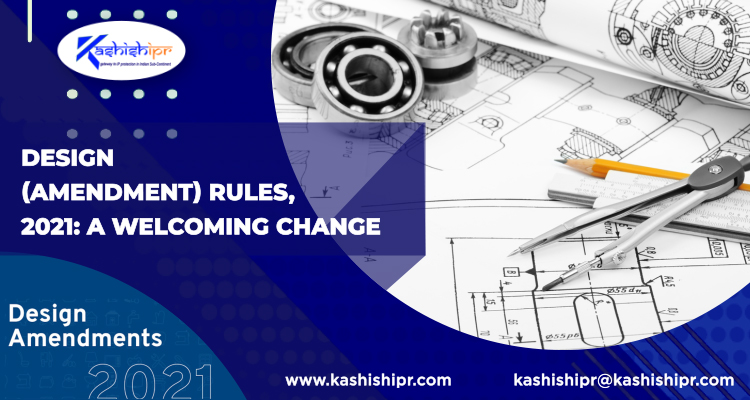 Following the power vested in the Central Government under Section 47 of the Designs Act, 2000, a new set of rules have been promulgated to carry out the provisions of this Act in consonance with the established international norms accustomed to meet the challenges of the Indian subcontinent.

The enforcement of this Amendment was envisioned on 7th June 2019 when India signed its instruments of accession to three international agreements, namely, the Nice Agreement, Vienna Agreement, and the Locarno Agreement. Even though India was not a signatory to these agreements earlier, it did reflect them in practice. To formally adopt the same, the Design Rules were amended and brought into being by resuming effect on 25th January 2021 through a formal notification in the Official Gazette by the Ministry of Commerce and Industry (MCI).

The following are the key changes that have been introduced through the said amendment:

The 13th edition of the Locarno Classification published by the World Intellectual Property Organization (WIPO) was enforced from the 1st January 2021. Therefore, the accession to the Locarno Agreement translated to the fact that all applications made in furtherance of claiming a design over an article ought to be classified following the 13th edition only, which is constitutive of 32 classes and 237 sub-classes, inclusive of explanatory notes.

Until India was bound by such an agreement, it latently followed the 10th edition, which comprised 31 classes and a miscellaneous, Class 99. This meant that there were a few industrial designs and models like ‘Graphic symbols and logos, surface patterns, and ornamentation,’ now found in Class 32, for which there were no appropriate classes earlier was one of the reasons that mandated such inclusion to be made. The same is not only beneficial in easing the process of registration by proper allotment of classes but rather, it is also helpful in creating a certain degree of homogeneity amongst applications from different jurisdictions by the acceptance of a unified classification system. It will also aid in simplifying searches of designs at both domestic and international levels to take pre-emptive steps before formally filing an application or even to defend one’s application.

The Design Amendment Rules have introduced the definition of ‘start-ups’ by adding section 2(eb), which states that a start-up is “an entity in India recognized as a start-up by the competent authority under Start-up India initiative.” As per the Start-Up India Initiative and a Notification by the Ministry of Commerce and Industry (Department for Promotion of Industry and Internal Trade (DPIIT)) on 19th of February, 2019, the following characteristics may help in establishing and claiming the status of a start-up:

Foreign entities are also brought within the ambit of this definition provided the start-up fulfils “the criteria for turnover and period of incorporation or registration as per Start-up India Initiative and submitting a declaration to that effect.” Therefore, just like the Trademark Amendment Rules, 2017 and the Patent Rules, 2003 identified start-ups then, the same is also reflected in the Design Rules with the benefit of a reduced fee in comparison to other applicants.

The first schedule has been revised to bifurcate two different categories of fees. It provides moderation of the fee to be paid by small entities. Earlier, where small companies were to pay only 50% of the fee, which was paid by other entities, since the amendment, natural persons, start-ups, and small entities are required to pay the equivalent application fees, which is one-fourth of the fee to be paid by other large entities.  This amounts to a concession of 75% in the payment of the official fee. Lastly, the Fourth Schedule has also been updated to revise the costs to be awarded by the Controller during various proceedings.

Since there has been a provision for start-ups introduced in the Rules as stated earlier, it has led to the up-gradation of certain forms. For example, Form 24 has been amended to provide for the applicant to claim the status of either a small entity or a start-up. Also, Form 1 has been revised to enable the applicant to choose among four different categories of an applicant, which includes either a natural person or a start-up or a small entity, or others.

However, this difference is not payable in the instance where, in the course of submission of the design application, a start-up or a small entity ceases to remain as a start-up or a small entity due to the lapse of the period during which it is recognized by the competent authority, or where its turnover subsequently crosses the financial threshold limit as notified by the competent authority.

There have been provisions made to avail the benefit of reduction in fee on account of being a small entity or a start-up or a natural person. However, where false information is admitted to misrepresenting facts as to the status of the filing entity, it would be understood that the entire fee has not been paid out as is also mandated by Rule 5(2)(b). Therefore, such an application would cease to have any effect until the entire fee has been fully paid. Also, it would empower the controller to make such an order for making, expunging, or varying such entry as he thinks is fit and rectifies the register accordingly.

The amended Rules allow for the service of documents through e-mails and mobile phones. It does so by mandating the applicants to keep a record of and provide for details, including mobile phone numbers along with the address for service of documents. The same is in line with the digitization of all documents being witnessed in day-to-day life to improve the accessibility of information.

The incorporation of new Rules through the introduction of the amendments mentioned above could have a positive impact on the regulation of designs in India for both domestic and foreign applicants. It will enable streamlining of application procedures and protection thereof while simplifying the regime. It will help achieve the goals laid by the Start-Up India Scheme by benefiting start-ups and smaller entities. It will help foster budding entrepreneurship ventures and proliferate businesses in India by encouraging the registration of designs, especially of start-ups and small entities. ✅ For more visit: https://www.kashishipr.com/