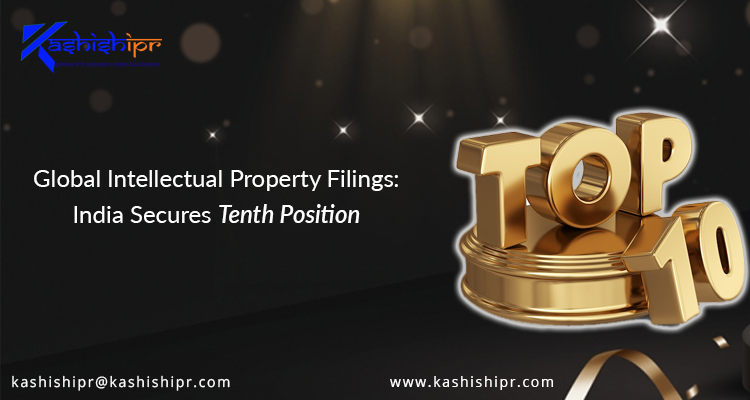 With continuous growth in Intellectual Property (IP) filing activities worldwide, India has witnessed a remarkable upsurge in Industrial Design, patent, and trademark filings in the last year, i.e., 2018. Where on one side, the nation saw more than 20% hike in trademark filing, on the other side, it witnessed a rise of 13.6% in the industrial design applications. While global applications for obtaining the Patent Protection increased by 5.2 %, Indian patent filings grew to 7.5%. Furthermore, the number of pending applications in the country hit a reduction of 25% in 2018 as compared to 2017. All these statistics have brought India onto the top tenth (10th) position amongst 49 countries ranked on the basis of the total (abroad and resident) IP filing activities.

Who’s At the First Position?

With over 50% of the overall applications, including trademarks, patents, and designs, the most global increase in the IP filings was made by China – as per World Intellectual Property Indicator 2019. When compared with the year 2017’s IP filings, China received around 160,400 more applications in 2018. If considered globally, Trademark Applications calculated 14.3 million, up 15.5%, industrial design fillings amounted to 1.3 million, and patent ones representing a growth of 5.2% in comparison to figures of 2017 exceeded 3.3 million.

Listed as the second rank nation – the US, unfortunately, witnessed a 1.6% fall in patent filings in 2018. Though the country’s trademark filing activity rose by 4.3%, yet fall in Patent Applications, which is the first decline the nation faced in the previous decade, is a point of worry.

As per Francis Gurry, director-general of WIPO (World Intellectual Property Organization), Asia is persistently emerging as the global hub for IP filings.

Coming back to India, the count of domestic applications for patents in this nation is continually increasing. It jumped from 22% in 2013-14 to 34% in 2018-19. According to the data provided by DPIIT (Department of Promotion of Industry and Internal Trade), the IP filings in the country have seen a notable rise in almost every sector, covering information technology (IT), science, and computer science. Moreover, startups, along with small and medium-sized enterprises, are also adding a lot in the IP fillings figures of India. For instance, IP applications by these industries saw a nearly 200% raise, and the numbers became 511 from 160 in 2016-17. In terms of patent filings related to the IT field, IT companies – Wipro and Tata Consultancy Services (TCS) were ranked 1st and 2nd respectively, while Hike, the seven-year-old startup, stood at the third position.

Though Kavin Bharti Mittal-led firm has been working in the field of R&D (research and development), including Natural Language Processing (NLP), Computer Vision, and Social Network Analysis, it has not yet uncovered reasons for filing 66 patents. Intended to incentivizes the employees with rewards and grants in addition to providing prospective patent filers with legal and market guidance, the company has recently launched a Hike Patent Program.

Undoubtedly, many other firms, whether related to IT or other fields, are also on the same path. It shows that the individuals, companies, whether startups, small, medium, or large, are recognizing the importance of Intellectual Property Protection. Besides, not just the businesses or entrepreneurs but even the government of India, is actively taking part in flourishing the IP filing scale of the nation. For instance, the Ministry of Commerce and Industry had reduced the patent filing fees for startups and MSMEs to Rs. 1600 from Rs. 4,000. It is one of the many steps that the department took to encourage people to come up with new ideas, inventions, designs, etc.

Ultimately, with over 60% of youth constituting India’s population and growing use of the internet and technology, pushing India further amongst the top five (or above) nations in the IP fillings worldwide should not be a big hurdle. However, it needs efforts on the part of both – the organizations and the government as the rise in IP filings will boost innovation and R&D activity, and the need to safeguard the innovations and products will grow the IP fillings in the country. For more visit: https://www.kashishipr.com/