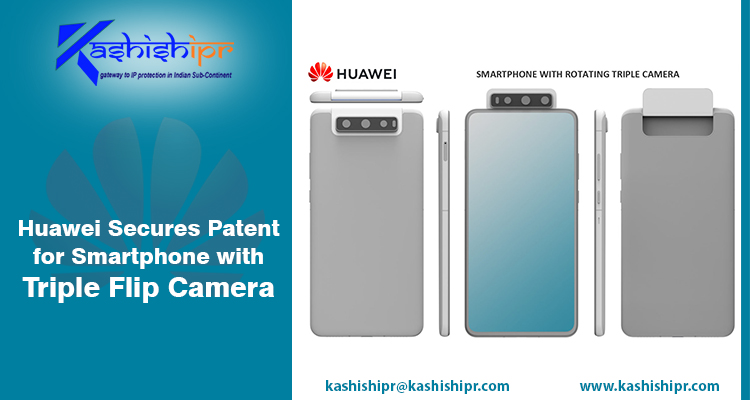 With the patent that has recently been secured, Chinese smartphone maker Huawei is expected to soon release a smartphone with a motorized triple flip camera. The company filed this patent with the World Intellectual Property Office (WIPO) back on January 9 this year but received the grant last week on December 17.

In terms of the pictures accompanying the Patent Application, the motorized camera appears to be similar to that of the Asus ZenFone 6 released this year.

News portal Gizmochina reported that while the design of Huawei’s smartphone and the Asus ZenFone 6 is a bit similar, but the upcoming device from the Chinese smartphone maker will feature three cameras instead of two. It also reported that the triple camera could be flipped to 180° facilitating users to use it as the front camera also.

In simple terms, the two smartphones are different as the Asus ZenFone 6 has a dual camera, while the Huawei patent application showed a device with three flip camera design.

Although the model name and other specifications of the smartphone are not revealed yet, an image showcasing the flip mechanism on the rear panel has been included in the supporting documents to the patent application. In total, the Patent Registration Application includes around 12 images showing a full-screen smartphone with a triple camera.

Additionally, Huawei appears working on the launch of a new Huawei P30 Lite (2020). As the present P30 Lite was launched in March this year, it can be hoped that the upcoming P30 Lite (2020) will be released in March 2020. Besides, it is predicted that this new smartphone will be launched in Europe first. When it comes to the phone’s specifications, there is very little information as yet. The two aspects being shared about the new P30 Lite are that it will be available in two colors -Blue and Breathing Crystal and that the price would be €349 (around ₹27,000). Though no technical specifications of this 2020 version have been shared, yet the device is expected to come with some improvements on the present 2019 model.

Coming back to the recently approved patent for the smartphone with a triple flip camera, there is no guarantee that it soon or ever be converted into a real-life patent as many other candidates file patents of this kind. It can be just that Huawei is simply strengthening its Intellectual Property bases in case the flip-phone form-factor kicks off to such an extent that it needs to compete with one of its own. For more visit: https://www.kashishipr.com/