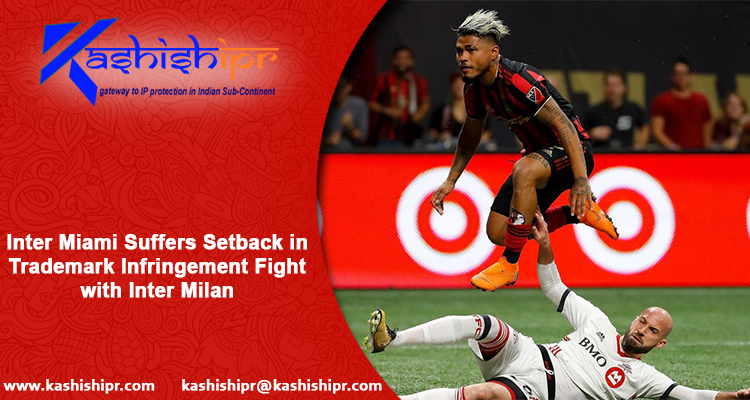 Inter Miami and Major League Soccer (MLS) have recently suffered a setback in the Trademark Infringement dispute with Serie A giants Inter Milan, as the U.S. Patent and Trademark Office (USPTO) dismissed one of the two arguments made by Miami that it should not be compelled to change its name.

On September 5, 2018, it was announced that the new Major League soccer franchise in Miami would be named Inter Miami CF – the official name Club Internacional de Fútbol Miami. As the team continued with a tradition of MLS teams copying European club titles like Real, Sporting, United, and City, the announcement raised some cries.

It also raised voices at Inter Milan, which filed a Trademark Application for its official name F.C. Internazionale Milano S.p.A in 2014 with the USPTO to get exclusive rights to use the term ‘Inter’ in the US, a move to prevent Inter Miami from marketing itself as ‘Inter.’ Inter Milan, in its application, contended that the team has become identical with the word Inter.

Despite the announcement made on September 5, MLS didn’t apply for the Trademark Registration for the name Inter Miami CF until September 25, 2018, and it wasn’t until March 2019 that MLS filed a notice of opposition to Inter Milan’s claim. The league, in the filed opposition, alleged that due to the widespread use of the word ‘Inter’ in soccer, the relevant customers don’t associate this word with one soccer team. Moreover, ‘Inter’ isn’t a source indicator for goods and services related to soccer.

The notice further claimed that the registration sought by the Applicant would damage MLS as such registration will prevent registration of ‘Inter’ with other wording even upon a showing of acquired distinctiveness in association with a soccer team.

According to many reports, Inter Milan successfully applied for a motion with the USPTO to dismiss the ‘likelihood of confusion’ claim by MLS. As the USPTO ruled, MLS claimed that several clubs worldwide use the term Inter in their name; for instance, SC Internacional of Porto Alegre, Inter Atlanta FC, FC Inter Turku (Finland), Brazil, Inter Nashville FC, NK Inter Zapresic (Croatia), Inter de Grand-Goave (Haiti), and Inter Leipzig (Germany). Nevertheless, the claim failed in showing that MLS possesses valid proprietary or ownership of the name ‘Inter.’

The USPTO ruling undermines one of the two key legal arguments of Miami. Although Inter Miami has used its right to replead the ‘likelihood of confusion’ claim and Inter Milan has filed a motion to dismiss it, the legal battle is expected to continue later this year. For more visit: https://www.kashishipr.com/