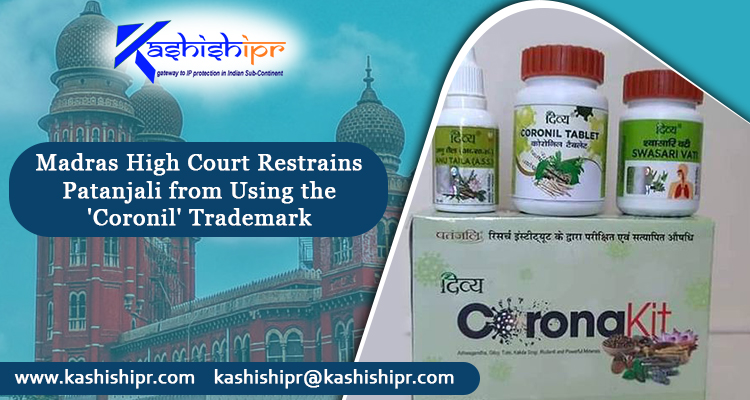 The controversial drug, Coronil (claimed as a cure for COVID-19), by yoga guru Ramdev’s Patanjali Ayurved Ltd, has quite recently received a blow, with the Madras High Court restraining the company from using the ‘Coronil’ trademark.

Justice CV Karthikeyan has passed the interim order valid till 30th July 2020 on the plea of Arudra Engineering Private Limited, a Chennai-based company claiming that it owns the ‘Coronil’ trademark since 1993. According to the company, which specializes in manufacturing chemicals and sanitizers for cleaning containment units and heavy pieces of machinery, it got the ‘Coronil-213 SPL’ and ‘Coronil-92B’ trademarks registered in 1993 and has been diligently filing all the Trademark Renewals since then. The company stated that its Trademark Rights are valid until 2027. While claiming that its products with the Registered Trademark own a global presence, the company mentioned that its clients include Indian Oil and BHEL. For substantiating its claim, the company also presented the sales bills of its products in the last five years.

The company said that the mark adopted by Patanjali for selling the drugs is identical to its registered trademarks in all aspects. The company further stated that although the products sold by Patanjali are different; however, the use of identical trademarks would still infringe upon its Intellectual Property Rights (IPRs). According to the company, permitting Patanjali to continue using the mark shall have a direct effect on its goodwill and reputation created over its registered trademark for even more than 26 years in both domestic and international markets.

After Patanjali came up with ‘Coronil,’ the Union AYUSH Ministry (the Ministry of Ayurveda, Yoga & Naturopathy, Unani, Siddha, and Homoeopathy, abbreviated as AYUSH) had, on 1st July 2020, said that the company would be allowed to sell the drug only as an immunity booster and not as a cure for COVID-19.

Ramdev, on the other hand, had reacted to the criticism received on the efficacy of ‘Coronil,’ by saying that some people were hurt by the rise of indigenous medicine. For more visit: https://www.kashishipr.com/