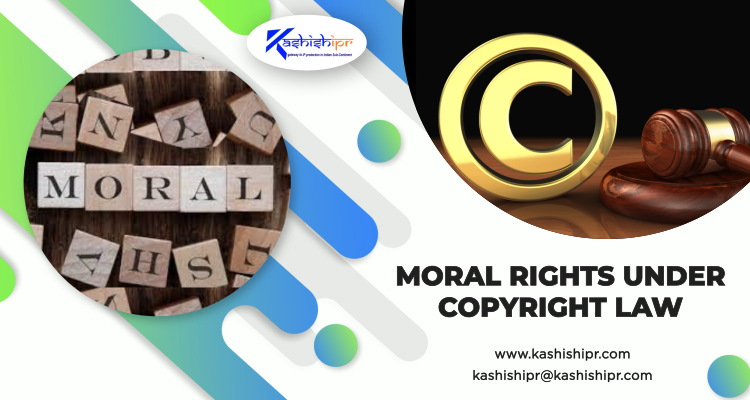 The Concept of Moral Rights

Copyright is a bundle of rights that is primarily an economic right. What happens after you have assigned, either wholly or partially, the copyright in your work to someone else? Does that mean you have lost all your rights in the work that you have created or still have some form of ownership in it? The answer to this predicament lies in the concept of ‘Moral Rights.’ It means that even after the ownership in work has been transferred or assigned, you have the right to claim authorship of the work and retain the work’s integrity.

Moral rights are the English translation of the French term ‘Droit Moral.’ Moral rights differ from copyright. Copyright protects property rights, which entitles authors to publish and economically benefit from their published works. On the other hand, moral rights protect personal and reputational rights, which allow authors to defend both the integrity of their works and the use of their names. In jurisdictions that legally recognize moral rights, authors have redress to protect any distortion, misrepresentation, or interference of their works that could negatively affect their honor. Moral rights are often described as ‘inalienable.’

Over time, many authors and artists have filed lawsuits regarding the use of their works or even the use of their names on works they did not authorize. The first legal international treaty to recognize the concept of moral rights was The Rome Act of 1928. Article 6bis of the Berne Convention incorporates a moral rights clause that protects the author’s rights to decide whether and when to publish works, claims of authorship after the work is published, and preservation of the work’s integrity as under:

(1) Independently of the author’s economic rights, and even after the transfer of the said rights, the author shall have the right to claim authorship of the work and to object to any distortion, mutilation or other modification of, or other derogatory action in relation to the said work, which would be prejudicial to his honor or reputation.

(2) The rights granted to the author in accordance with the preceding paragraph shall, after his death, be maintained, at least until the expiry of the economic rights, and shall be exercisable by the persons or institutions authorized by the legislation of the country where protection is claimed. However, those countries whose legislation, at the moment of their ratification of or accession to this Act, does not provide for the protection after the death of the author of all the rights set out in the preceding paragraph, may provide that some of these rights may, after his death, cease to be maintained.

(3) The means of redress for safeguarding the rights granted by this Article shall be governed by the legislation of the country where protection is claimed.

Generally speaking, there are two major kinds of moral rights. These are:

The Right of Attribution says that no matter who gets to exploit the economic rights in a copyrighted work (for instance, no matter who it is licensed to), the author still has a right to be named as the author or creator, i.e., the author must be named, must have an acknowledgment, etc.

The Right of Integrity means that the creator of work gets to prevent any action that would destroy the ‘integrity’ of the work. That is – if the author reasonably feels that making certain changes in a creative work would undermine the author’s creative intent, or the author’s vision, reputation, or something similar, then the author can prevent that change from being made, independent of any economic rights that another person may own under a license or ownership of the copyright.

Duration and Scope of Moral Rights

The existence of moral rights raises a crucial additional element in the negotiation and drafting of certain agreements. Unfortunately, for many authors, the transfer or license of copyright is often accompanied by the insistence of the purchaser on the waiver of those moral rights. Nonetheless, some countries do not permit a waiver of moral rights even if the author agrees to it (For example, France).

The legislation in various countries allows authors or creators of works to take legal recourse for ‘mistreatment’ or infringement of their moral rights. Courts usually have the discretion to choose remedies for that infringement and also can prescribe damages, and order public apology and reversal of mistreatment of work, film, or performance.

In Australia, if a creator makes a claim for infringement of moral rights, the remedies a court can grant include –

There are several factors that a court can contemplate at the time of deciding the suitable remedy, such as anything done by the defendant to reduce the effects of the infringement. While deciding whether to grant an injunction, the court must first look at ways to allow the parties to negotiate a settlement.

In Europe, it is not possible to assign or waive moral rights. It is regarded as an item of property that cannot be sold but only licensed. The author can waive them only to a limited extent in contractual agreements. The author may also be required to ‘assert’ these moral rights before they can be enforced. The scope and duration of moral rights vary among the different member countries of the EU. Infringement of moral rights can lead to classical remedies consisting of injunctions and damages. Some countries, for instance, Germany, explicitly recognize the author’s moral rights. In Germany, they are codified in the Copyright Act of 1965. They resemble the rights stipulated in the Berne Convention.

In the United States, Visual Artiste Rights (VARA) grants moral rights to authors of visual works only. An author can prevent misattribution of works and also require the authorship of works to not be disclosed. An author can take action for defamation if the author’s help of work is attributed to an author against his or her will or misattributed. Moral rights are very rarely asserted in the US, and even more rarely is such an assertion given any weight by a court. The reason behind this is that most legal agreements grant a copyright license that usually includes a waiver of all moral rights, even for works (like books) for which the US copyright law does not protect moral rights.

In India, in the case of Amarnath Sehgal vs. Union of India, the court provided a remedy for infringement of his special rights or moral rights. It was held by the court that copyright is a bundle of rights, which the author can exploit, independently for economic benefit any exercising these rights. A copyright owner may exploit his work himself or license others to exploit any one or more of the rights for a consideration, which may be in the form of royalty or a lump sum. Apart from the payment for economic rights, the author of a creative work has certain moral rights as well.

Today, most common law jurisdictions and also most civil law nations of Western Europe recognize and have adapted legislation related to the moral rights of authors and artists. They consider copyright to be more of a personal right of the author of the work – giving him or her credit for intellectual effort and creativity. The Right of Paternity or Attribution gives the copyright owner a right to claim authorship of the work, and the Right of Integrity gives the owner a right to prevent any distortion of the work, which would be possibly harmful to the reputation and honor of the rights holder. Economic rights can be licensed; however, moral rights cannot be licensed. They remain with the author even if he or she has assigned or licensed his or her other rights.

When artists or authors come up with a creative work, they express an opinion and also their personality. Whether the work is in the form of a painting, a photograph, a motion picture, or in any written form, the expression is of the artist or the author, which must be protected. In this scenario, who and what entity funded or provided the means for its production should have no relevance to the determination of ownership in the opinion produced. Moral rights are representative of social values concerning authorship, creativity, and artistic work. Moral rights flow from the fact that a literary or artistic work reflects the personality of the creator and are more than just an attempt to earn a livelihood. ✅ For more visit: https://www.kashishipr.com/