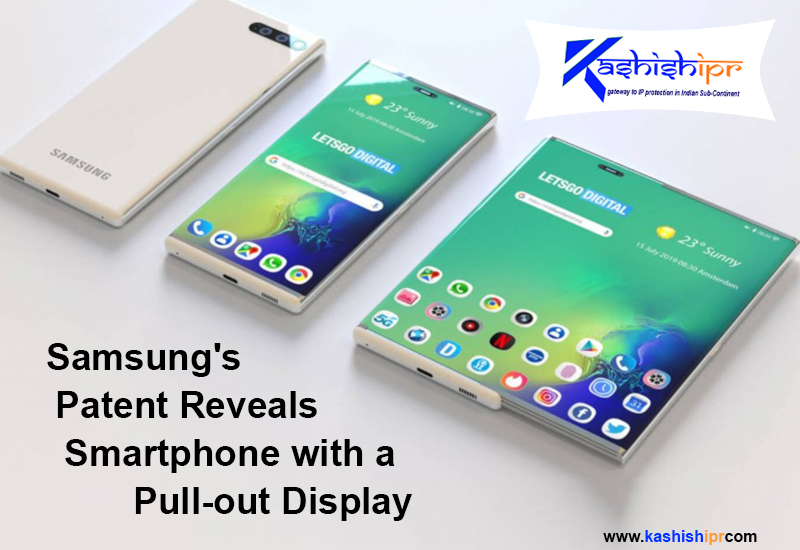 Samsung, a South Korean multinational conglomerate, is on the verge of coming up with several new announcements. For instance, Galaxy Note 10 Series is set to launch next month on 7th August, 2019, at the Unpacked event. Besides, there are rumors that the South Korean giant is actively working on Galaxy S11 lined-up under the codename “Picasso.”

Although the Galaxy Fold phone of Samsung has not released yet, information regarding another smartphone from the tech giant is already in the news. In a recently published patent from the Korean Intellectual Property Office, the tech giant has proposed a smartphone with an extendable screen.

The brand filed for the new smartphone design patent towards the end of 2018; however, it attained the approval in May, which got published in June 2019.

The patent sketch shows the smartphone with a pull-out display that increases the phone’s width by around fifty percent. When the user opens up the display panel on the right-hand side, a frame border around the screen will also get opened partially to safeguard the display. It means that this design will give users a tablet-sized viewing experience, along with keeping the screen protected. The patent design also reveals a punch-hole camera set to a position in the center of the front display. Unfortunately, the documentation has not shared details regarding the phone’s technical features and its functioning.

As everything still rests in the patent, it is difficult to say when the phone will be available to the users.

Note that the companies often file patents for their upcoming inventions, but all doesn’t seem to come in light of the day. Hence, it remains a doubt whether Samsung will surely develop a smartphone with such a design or not, and if it will, then when. For more visit: https://www.kashishipr.com/