Solapur-based Farmer Gets Patent for A Variety of Custard Apple 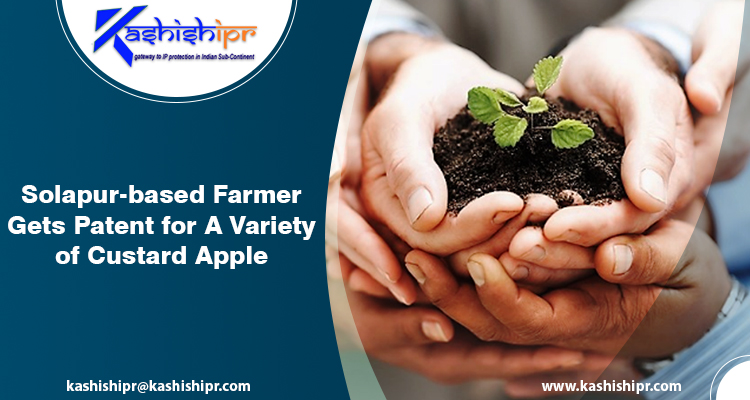 After a labor of 10 years made to drew success with NMK – 1 Golden, a variety of custard apple, whose annual production reached up to 250 tonnes this year, Solapur-based farmer named Navnath Kaspate has recently got a patent for it under the Protection of Plant Variety and Farmers’ Rights Act.

Navnath Kaspate said that his Patent Application representing a variety of custard apple was under scrutiny with the central government of India for the last three years. Mr. Kaspate is Sixty-four-year-old and from a village named Gormale situated in the arid area of Barshi taluka in Solapur district. In his early days of farming, he used to cultivate grapes. But later, after gaining experience, he realized and revealed that cultivating custard apples is remarkably cheaper than growing grapes.

In a conversation with the Times of India, Kaspate unveiled that through years of experience and several researches, he has now succeeded in developing more than 40 varieties of custard apple in his field.

He said that they worked NMK-1 Golden variety for near about ten years, from 2001 to 2011. He spent most of his quality time in his fields, and after successful trials, rigorous work based on various and continuous researches and experiences, he and his team were able to bring up the variety, which led to their success. He continued by saying that he had been cultivating custard apple of this specific variety from the last many years, and every year, there has been a high increase in production. Kaspate revealed that out of 45 acres, 25 acres region of his land possess NMK – 1 Golden plant, whose average annual production has now reached to around 250 tonnes that can fetch returns up to Rs. 1.25 Crore.

Navnath Kaspate’s son Pramod said that NMK – 1 Golden variety has proved to be superior than other local varieties on many fronts. Not just the size of the fruit, but even the per acre production is high as compared to previous years. Besides, it is found to be tastier and sweeter than the early fruits. Its digestive power also appeared to be enhanced. He added that spending Rs. 60,000 for an acre can provide the returns of around two lakhs to five lakhs, after a small period of two years.

Pramod ended the conversation with a statement that on the remaining 20 acres area of their farm, a nursery has been developed for research and cultivation of saplings of NMK – 1 Golden variety, and also that over 10 lakhs saplings are being cultivated at the nursery annually and then, supplied to around 18 states. For more visit: https://www.kashishipr.com/