Statutory Licensing in India in the Age of Online Music Streaming: A Comment on Tips vs. Wynk 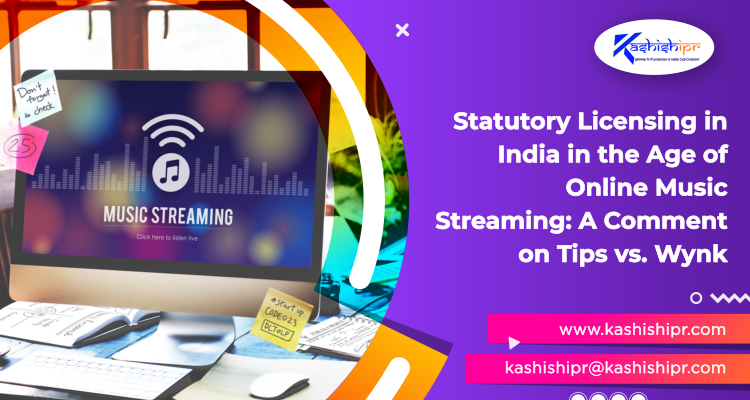 Internet streaming in India contributes to the majority of revenues of the recorded music industry. With the onset of the trend wherein users are gradually switching to online streaming to meet their music needs and discarding traditional methods such as radio, television, and music CDs, compulsory licensing for the internet was recognized as a key policy issue by the music industry last year. Licensing is imperative for the product because it is known that music rights holders have worked hard. Although customers may have easy and legal access to music than before, how true is it in India? If the music that is streamed is not licensed out, then does it amount to Copyright Infringement?

Section 31D of the Copyright Act, 1957, which was introduced in 2012, allows any broadcasting organization to stream to its users any music or sound work that is previously published by invoking a compulsory license by way of unilateral notice and paying the royalty that is determined by Intellectual Property Appellate Board (IPAB) by way of Copyright Rules. Due to the widespread growth of the internet all over the globe, ‘communication to the public’ via the internet is much more prevalent, and thus, on 5th September 2016, the Department of Industrial Policy and Promotion (DIPP) issued an Office Memorandum clarifying the scope of Section 31D of Copyright Act, 1957 by construing that “Any broadcasting organization desirous of communicating to the public” may not be restrictively interpreted to be covering only radio and television broadcasting, as the definition of ‘broadcast’ read with “communication to the public” appears to include all kinds of broadcasts, including internet broadcasting; thereby, bringing ‘online broadcasting’ under the ambit of section 31D of Copyright Act, 1957.

The Bombay High Court, in a decision not very long ago, held that the existing provisions on statutory licensing under the Copyright Act and Copyright Rules did not include internet broadcasting by means of internet streaming and/or downloading.

The Plaintiff, Tips Industries Ltd., had claimed to be the owner of the copyright in over 25,000 sound recordings. The Defendants own and operate Wynk, an Over-the-Top Service available on the internet, smartphones, and smart media. Via this service, upon payment of a subscription fee, the Defendants’ subscribers could access numerous sound recordings and audio-visual recordings, including, among other things, the Plaintiff’s Repertoire. Tips’ Repertoire was earlier licensed to the Defendants by the copyright society – Phonographic Performance Limited. After the end of the license term mentioned above, negotiations arose between Tips and Wynk to arrive at terms for a renewed license; however, there was a failure to do so. Wynk then invoked Section 31D of the Copyright Act, 1957, by claiming itself to be a broadcasting organization. In brief, Wynk claimed that it was a ‘broadcasting organization’ and that it was permitted to get a statutory license under Section 31D of the Copyright Act to communicate the work to the public by way of the broadcast of Tips’ musical work and sound recordings. The same was the focal point of contention between both parties during the succeeding hearings.

The learned Senior Advocate for Tips Industries submitted that Section 31D of the Act does not anticipate a right or entitlement to rent out or sell copyrighted works commercially (which, allegedly Wynk was doing by providing users an option to download the music). The said section only anticipates a statutory license for ‘broadcasting.’ Furthermore, he submitted that even otherwise, a broadcast is a kind of activity that falls within the scope of ‘communication to the public.’ The learned Advocate for Tips submitted that the right to rent/sell sound recordings commercially is a separate right carved out under Section 14(1)(e)(ii) of the Act and is independent of the right to communicate to the public as provided in Section 14(1)(e)(iii) of the Act. It was also argued that if there is a combined reading of Sections 2(dd), 2(f), and 31D of the Act along with Section 14(1)(e) of the Act, it can be clearly understood that the legislature intended to exclude the right to rent out/sell sound recordings commercially from Section 31D and what is included is only the communication of sound recording to the public. In the meantime, seeking to claim the benefit of Section 31D, Wynk’s counsels had contended that it was a broadcasting organization and that it was ‘communicating to the public’ by way of the broadcast of the Tips’ Repertoire over the Internet.

The court held that Wynk could not invoke the provisions on statutory licensing under the Copyright Act in respect of its download/purchase business. The reasoning of the court can be summarized as follows:

The Bombay High Court came to a prima facie conclusion that Wynk’s dependence on section 31D was void both on substantive as well as procedural counts and that its services amounted to an infringement of Tips’ copyright. The court also determined that since the whole of the Plaintiff’s repertoire was being infringed, the balance of convenience was in Tips’ favor, and the absence of an injunction would cause irreparable injury.

Under the Draft Copyright (Amendment) Rules 2019, all methods of broadcasting are intended to be covered under the garb of statutory licenses, including internet and Over-the-Top (OTT) media services such as Netflix, Hotstar, Amazon Prime, Gaana, Saavn, and the newest entrant in the Indian market, Spotify. It is an attempt to extend the statutory licensing to ‘internet broadcasters.’ The proposed rules, if passed, are expected to affect online streaming content services that may get better access to the content at improved terms and conditions. It is also imperative to note that the draft rules only lay down the procedure to implement the license under Rule 31D. The uncertainty about the substantive provision remains.

The introduction of Section 31D in 2012, by which time internet access to music was absolutely in existence, is evidence of the legislature’s intent to exclude internet broadcasting from the ambit of statutory licensing and confine the provision only to radio and television broadcasting. With the distinct shift of users from radio and television broadcasting to online streaming for listening to music, the legislature will also have to look into framing laws more precisely and appropriately for internet broadcasting and the rights and restrictions that go with it.

Despite being well-reasoned, the Bombay High Court’s judgment sits awkwardly with the Government of India’s policy on the issue of providing access to musical works to the public through the statutory licensing scheme, which is specified in the DIPP’s office memorandum. Practically executing this policy position would require legislative intervention through substantive amendments to Section 31 D of the Copyright Act to specifically comprise internet broadcasting services. The legislature would also have to resolve crucial conceptual problems concerning the applicability of current copyright in online digital transmissions – for instance, whether caching services qualify as a ‘sale’ or ‘rental.’ In doing so, India can follow jurisdictions like the United States, which allow for the statutory licensing of sound recordings for ‘non-interactive’ services, like online radio (17 USC Sections 112 and 114), and which recently came up with the Musical Works Modernization Act to streamline the licensing process for online music streaming. ✅ For more visit: https://www.kashishipr.com/