The Best Mode of Software Protection – Copyright or Patent? 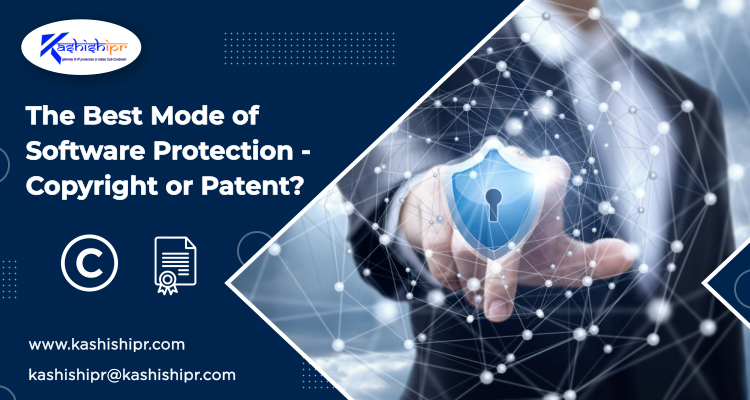 In many nations, a distinction is drawn between inventions implemented in hardware, which are patentable, and inventions implemented in software (i.e., computer programs), which are protected by Copyright Law. But in the modern world where the Internet – and not hardware such as CDs – is the main method for software distribution, this legal distinction makes it challenging for software creators to efficiently choose, protect, and leverage the commercial value of their inventions through IP regimes. So, the question that becomes important for software creators is, “Which route is best suited for protecting their software – patent or copyright?”

Copyright refers to the expression of an idea, not the idea itself. In other words, copyright is applied to artistic work to establish authorship. Copyright is inherent and comes into force as soon as one finishes his or her work. The creator instantly owns the right to control distribution, who all are permitted to copy the work, etc. Copyright protects the “original works of authorship,” which in software means the code itself. It implies that if another developer had access to a software creator’s work and engineered the same code later, it would be Copyright Infringement. On the other hand, if the developer did not have access to the work at the time when he or she engineered the same code, this would be completely legal. With regards to computer software, copyright can be used to prevent the complete copying of a software program, as well as copying any portion of the software code (both of which would be regarded as ‘literal infringements’ of copyright).

Copyright Protection extends for the author’s lifetime plus 50-70 years (depending upon the particular country). Hence, protecting software programs under copyright law (which, in any case, is automatic) appears to be lucrative. However, it is reiterated that copyright protects the expression of an idea and not the idea itself. Hence, in the case of software programs, it is the software code that is protected and not the functionality of the software programs. It may not always be a good idea to rely solely on copyright law to protect a software-related invention.

Advantages and Disadvantages of Copyright Protection for Software

The primary advantage of copyright protection lies in its effortlessness, as it accrues automatically without the need for registration (as provided under some international agreements), and where the process of obtaining a registration (which is sometimes needed for evidentiary reasons in some nations) is fast and low-cost.

Software patents, in contrast to copyright, protect the creation of the inventive concept behind the work. Patenting is a good way of protecting original computer programs, although obtaining a patent is not easy. Software patents are typically referred to as computer-implemented processes. The software can be protected if it is unique and tied to a machine. Most significantly, for software to be patentable, the software needs to offer some identifiable improvement. Simply performing something that is known on a computer (such as adding numbers together) is highly unlikely to be patentable.  For instance, the United States Patent Law excludes ‘abstract ideas,’ and this has been used to refuse some Patent Applications involving software.

In Europe, ‘computer programs as such’ are excluded from patentability. The European Patent Office holds that a program for a computer is not patentable if it does not have the potential to cause a ‘further technical effect’ beyond the inherent technical interactions between hardware and software.

To patent software, it needs to be novel, inventive, and non-obvious. It means that software would have to be both unique and not obvious to someone in the industry. The Patent Protection term usually lasts between 15 to 20 years (varying from country to country).

In the past, it has been problematic to obtain a software patent in several jurisdictions – for example, the United Kingdom and Europe, due to software being defined as an excluded subject matter. Nevertheless, in recent times new tests have been put in place, which set out possibilities for obtaining software patents in some specific cases that have made the process more attainable.

Some examples of software patents are:

Advantages and Disadvantages of Patent Protection for Software

Once a person is granted a software patent, he or she has the exclusive right to make, use, license, and sell that software invention. A broad software patent application may further include proprietary processes, systems, methods, functions, and algorithms. This enables the inventors to gain an advantage over their rivals while also building a defensive patent portfolio. A patent over a software invention can be used to prevent others from utilizing a certain algorithm without permission or to prevent others from creating software programs that perform patent-protected functions. Patent protection prohibits other parties from reproducing the protected concepts, features, and processes underlying the software (called computer-implemented inventions) even if the source code was not reproduced, and a new source code was developed independently.  In contrast, copyright law protects only a particular expression of an idea, i.e., exact copying of source code or a portion of it, and not the copying of the idea/functionality. Accordingly, patents offer broader protection.

Acquiring a patent also requires the inventor to disclose novel information about his or her innovation in the application process. Since there may be numerous ways to replicate a solution using software (such as reverse engineering), disclosing the idea may diminish the competitive advantage that the inventor is trying to achieve. Furthermore, most IP offices have significant backlogs, making the process of patent application a time-consuming process. The patent’s protection term is also shorter than copyright and generally lasts 20 years from the filing date as opposed to a much longer-term in the case of copyright. The process of obtaining a patent is much more expensive than copyrighting and usually takes longer than acquiring copyright.

Patents vs. Copyright: Which One should You Use?

Some major contrasting characteristics of these two forms of IP protection for software programs are summarized as follows:

The dilemma of whether to opt for patent protection or copyright arises when there is an inventive aspect associated with a software program or a process. In case the software program or a process has inventive aspects, one should certainly consider the option of protecting it using patents because the protection offered by patents is much broader and stronger as compared to copyright.

At the same time, protecting software needs a technical understanding of the different types of software and a strategic outlook on the best way to protect the different aspects thereof through the available IP regimes. Well-rounded protection of software programs usually requires a combination of copyright and patents strategically designed to protect the various aspects of the software. Each one of these IP regimes should be used tactically depending on the nature of the underlying innovation features. The commercial objectives of the company in question should also be taken in regard, in addition to the applicable laws in the nations where the software is sought to be commercialized and exploited. Ultimately, the choice of whether to opt for copyright protection and/or patent protection for a software program comes down to the likelihood of success, the costs involved, and the final objectives of the inventor. ✅ For more visit: https://www.kashishipr.com/