The Infamous Defense of Inequitable Conduct 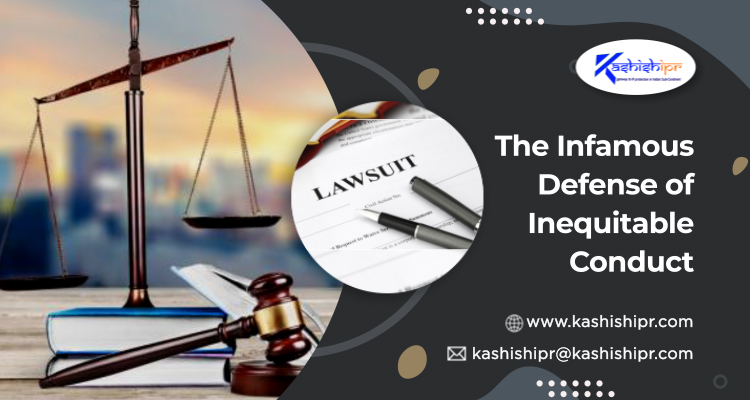 What is Inequitable Conduct?

Obtaining a patent is an uphill battle. Even after a patent is secured, it is not the end of all battles. There are instances where a patent holder may be deterred from enforcing his patent against an act of infringement on account of equitable defenses like unclean hands, estoppel, or laches. One of such defenses is the doctrine of inequitable conduct, which is referred to as a breach of the duty of being honest or acting fraudulently in conduct while dealing with the Patent Office.

It may so happen that the patent holder makes a misleading or misrepresenting or false disclosure of information, which is material to the invention. It is a breach of the duty of candor. The duty of candor states that a few individuals associated with the Patent Application have some duties and rights related to the submission of information, which shall be catered to irrespectively.  Hence, inequitable conduct may occur, for example, if one bribes researchers to lie as to the original date of the invention. It certainly means that the invention has been secured at the cost of causing damage to the patent system, potential and existent patentees, courts, other parties, and society at large.

This doctrine is found under the United States Code of Federal Regulations in 37 CFR §1.56, which states the duty of candor. The provision places an obligation on the inventor and any other person who is involved in the filing and prosecution of a patent application with the duty to disclose all relevant information known to that person, which is material to a particular patent application in the form of an Information Disclosure Statement to the US Patent and Trademark Office (USPTO).

Evolution of the Defense of Inequitable Conduct

The defense of inequitable conduct was realized by the legislature in the US statute of patents, namely The Patent Act of 1790. At its earliest, the statute allowed the filing of a private cause of action within one year of patent issuance, where it was believed that the patent was obtained “surreptitiously by or upon false suggestion.”

Later in the Act, the period of resorting to this defense was extended to three years. Then, The Consolidated Patent Act of 1870 extended the scope of this defense by replacing the private cause of action with a defense against infringement on account of the patent being procured by a deceptive application. How the defense appears today is as a defense in an alleged case of infringement where the patent is unenforceable due to there being a lack of candor or a breach of duty to disclose substantial information during the stage of prosecution of a patent.

It was much later in 1945 when the Supreme Court recognized that such unqualified conduct of an inventor amounts to damage of public interest. The doctrine is routed in the doctrine of unclean hands that states that “he who comes into equity must come with clean hands.”

Rationale Behind the Defense

The principal idea, as observed above, is to undo the harm that may be caused to the public due to the exercise of bad faith. The patent offices, upon whom the information is bestowed by disclosing facts through the patent application, decide either in favor or against the applicant on account of the information furnished. Since the patent office is going to rely on the statements of the applicant concerning the issues that are going to be dealt with in the patent prosecution process, there shall be the maintenance of equitable conduct.

Similarly, the court shall also rely on the submission made by the applicant since there is no choice other than to utilize the submissions made. This general trust and affiliation between the patent applicant and patent office, when abridged by the applicant, can unsheathe a two-sided sword. It hampers innovation by preventing any further applications from being made and curbing the flow of innovation in a particular field. It also restricts the public by limiting their access to an invention, which could have served better than the one that has been made in bad faith. Therefore, bad-faith disclosure slows down the growth of industry, and ultimately, the growth of the civilization.

Elements of the Defense of Inequitable Conduct

For a person who has been alleged of infringing a patented invention, the defense of inequitable conduct may be taken, which would have the effect of rendering the entire patent unenforceable to shed away any liability.

The following elements need to be proved before the court for successfully defending one’s action and making a patent unenforceable:

The Federal Circuit elaborated on the two-prong test of materiality and malafide intent to clarify the scope of adducing such proofs in the case of Therasense, Inc. v. Beckton, Dickenson and Co. The court laid that there is no ‘sliding-scale’ when it comes to proving both materiality and intention. Therefore, it would not qualify as a defense if the proof of materiality is more elaborate than the proof of intent. Both the elements should be separately satisfied, and compensation of one element for another would not suffice.

After receiving such submissions, the court decides upon the question of the unenforceability of the patent through a two-step decision-making process. The process involves:

Where it is proven that there has been inequitable conduct regarding any claim at the stage of prosecution of a patent, it would automatically render the entire patent unenforceable and not just that specific claim. Furthermore, where such a patent belongs to a patent family or other related inventions, it can render them unenforceable too. This would, however, require additional proof of an ‘immediate and necessary relation’ between the interrelated patents, along with the fact that such inequitable conduct occurred prior in the chain of interrelated issued patents. It is for this reason that courts have also referred to this doctrine as the doctrine of ‘infectious unenforceability.’

Should the Defense be Eliminated or Reformed?

The doctrine of inequitable conduct is not frequently entertained; however, it is not redundant. It has been observed that there has been an inconsistent use of the doctrine, and therefore, courts have to bring about a change to ensure its homogenous application. Since patents have social and economic consequences, it gives a substantial incentive to the public to ensure that the disclosed patents are free of fraud or misconduct. Therefore, the social cost should be attempted to be minimized by the balanced use of the defense.

Furthermore, the doctrine cannot be eliminated entirely as human action is fallible; instead, there should be a mode of correcting and undoing the damage by striking off patents obtained through fraudulent activities. Unlike the route of antitrust and common law fraud claims, which create a higher burden on the defendants, the said defense is a more quick and efficient way to tackle the situation. The following reforms may be introduced to deliver well from this defense:

The defense of inequitable conduct is a very useful tool; however, it may be used to the detriment of the legitimate holder of rights emerging out of creativity and a great deal of hardship just to save an alleged infringer from liability. The use of such a powerful doctrine and defense should be made while exercising utmost precautions. Such a defense undertaken in bad faith should be discouraged and penalized in all seriousness. The courts should, therefore, exercise careful discretion to prevent utilization of such a doctrine attempted to discourage innovation and creation. ✅ For more visit: https://www.kashishipr.com/