Trademark Issues: How is Social Media Becoming the New Target for Cybersquatting? 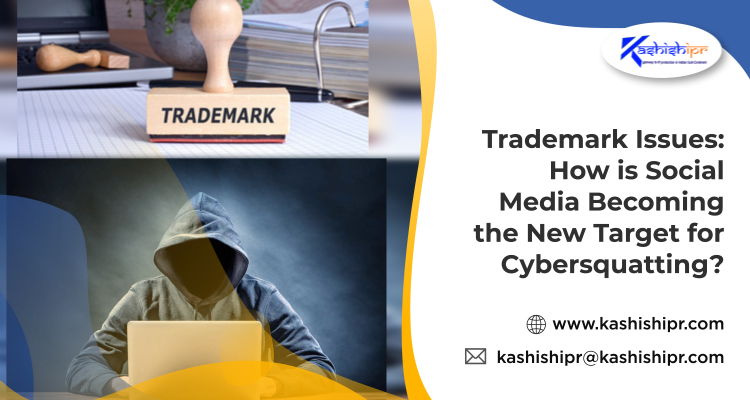 A trademark refers to a legally registered word or symbol representing a specific product or service of a company. It helps the public at large to identify the products and services of one and distinguish them from those of others. Therefore, we can say that a trademark serves as a helping hand in gaining more uniqueness and popularity everywhere, including on platforms as prevalent as the internet.

When it comes to the term ‘cybersquatting,’ it refers to the phenomenon in which fraudulent entities use the internet domains of widely recognized brands and companies to extract benefits from their reputation and goodwill. Such fraudulent entities often utilize the names or other identifying markers without obtaining permission from the entity to which the name or the identifying marker belongs. At a later stage, these fraudulent entities attempt to sell the internet domains in question with the Registered Trademarks to the brands or companies to which the names belong, with the intent of making colossal profits.

The term cybersquatting is derived from the term ‘squatting,’ which refers to the act of occupying an unoccupied section or space not belonging to the squatter. Generally, it is described as using widely-known trademarks as internet domain names for earning profits by reselling them. It is essential to note that the registrant of the internet domain name doesn’t possess any rights over the trademark. To be specific, the act of cybersquatting is nothing but infringing upon the exclusive Trademark Rights of the owner.

In this blog, we will understand how social media is becoming the new territory for cybersquatting and shed light on the steps to reduce the issue on different social media platforms.

How Cybersquatters Tarnish a Brand on Social Media

The term ‘Social Media’ came into being as a mechanism or way for people around the world to interact, communicate, and stay in touch with their friends, family members, acquaintances, and new individuals using many innovative technologies on the internet. With the emergence of various social media platforms, like Facebook, Twitter, Instagram, LinkedIn, and so on, a new type of cybersquatting has been on the rise, which revolves around registering the trademarked names or brands belonging to notable entities or individuals on prime social media networks.

Due to the increasing popularity of social media platforms, many organizations and business companies now own profiles and accounts on such platforms to earn more loyal customers. Many such platforms also offer verification tags to well-known individuals and entities to enable them to build strong goodwill and a reputation for their brand and trademarks.

While Tony La Russa (the former manager of the St. Louis Cardinals and Oakland Athletics) dismissed his lawsuit against Twitter voluntarily, his dispute showcased the hazards associated with the username feature on social media platforms. Tony La Russa had filed a complaint against Twitter alleging cybersquatting. The dispute involved a Twitter account with Tony La Russa’s name, picture, and description saying, “Hey there! Tony La Russa is now using Twitter.” This account on Twitter encouraged the other Twitter users to follow it and receive updates about Tony La Russa. Tony La Russa believed that the updates shared were defamatory and nasty. He even contended the account’s creator for creating it with bad faith and making profits from Tony La Russa’s trademark. However, Tony La Russa ended up filing a dismissal voluntarily after the parties involved solved the dispute.

The offensive usage of tags and the reservation of usernames on social media platforms are exceedingly harmful to the trademark holders. When we talk about Facebook in this scenario, the American multinational technology conglomerate accepts that username infringement can be a serious issue, specifically in cases when someone else tries building a reputation with a trademark on which its rightful owner has spent significant time, money, resources, and effort building. Cybersquatting through infringement of usernames prohibits the trademark owners from using such known usernames and obstructs their ability to use their trademarks on those specific social media channels.

It is imperative to keep in mind that reservation of usernames with bad intent can defame and tarnish the trademark’s reputation as well, eventually leading to trademark owners losing control over the reputation of their respective trademarks. Let us discuss Clean Flicks, Inc. v. Daniel Dean Thompson to understand this aspect better. In this lawsuit, cybersquatting committed by the defendant spoilt the Clean Flicks trademark. To put it straightforwardly, the defendant registered Clean Flicks Media as his username on Myspace, a social networking service based out of the United States. The defendant tried making others believe that he was one of the founders of Clean Flicks Media. Finally, he was arrested for possession of child pornographic contents, statutory rape, and many other incidents and crimes reflecting an image opposite to the family-friendly image portrayed by Clean Flicks. Due to the arrest of the defendant, news stories associated Clean Flicks Media with him as Myspace and Clean Flicks had to enforce legal action to safeguard their prestige. Therefore, it would be wise to mention that reserving usernames through cheating leaves trademark owners with no control over the reputation of their marks, which, in turn, could end up harming their image and trademarks.

If registered trademarks are infringed upon on Facebook, the platform reserves the exclusive right to reclaim usernames. Trademark holders and proprietors are accountable for reporting Trademark Infringement instances using Facebook’s online ‘username infringement form’ or ‘trademark report form.’ Moreover, usernames on Facebook need ‘mobile number authentication,’ which implies that obtaining a username requires a user to validate his account using his mobile device.

The free, online photo and video-sharing social networking service – Instagram – is the new trending platform among millennials. Since the number of Instagram users is increasing exceptionally, there have to be adequate measures to avoid cybersquatting. Instagram follows the concept of ‘verified accounts’ to control identity confusion. On Instagram, verified accounts are marked with a blue tick, which indicates that the profile is confirmed by the platform to be the authorized profile for the brand or individual representing it.

Twitter’s ‘name squatting regulation’ prohibits cybersquatting, thereby eliminating the occurrence and creation of ‘username for sale’ profiles or accounts on the platform. Twitter ensures that selling, extorting money, or other forms of payment in return for usernames leads to the account suspension of the party or individual involved in the same. Furthermore, the platform has an ‘impersonation policy’ prohibiting non-parody impersonation.

An account on Twitter is said to be guilty of impersonation if it provides incorrect details or creates confusion in the minds of others. Accounts with such a motive may be permanently suspended on Twitter. The platform’s standard to define parody is whether or not an average person would be knowledgeable to realize the fake profile is a joke. Lastly, following Tony La Russa’s lawsuit, Twitter introduced the concept of ‘verified accounts’ to prohibit identity confusion. The ‘verified account’ insignia on a Twitter profile indicates it is a legitimate and genuine account.

Cybersquatting undoubtedly has a cascading impact on the social and economic interests of the society, due to which it should be prosecuted to provide a deterrent effect. The governments of different nations believe that cybersquatting is a serious issue and have implemented several initiatives to combat it. For instance, the United States has the Anticybersquatting Consumer Protection Act (ACPA) of 1999, which curbs ‘cybersquatters’ who register Internet domain names similar to registered trademarks with an intent to sell them to the trademark owners or some third party at a very high price. The Uniform Domain Name Resolution (UDRP) is a method introduced by the Internet Corporation for Assigned Names and Numbers (ICANN). It settles conflicts relating to registrations of trademarks and domain names. In nations like India, where there are no domain name safeguarding laws as of now, the .INDRP, i.e., .In Domain Name Dispute Resolution Policy is a process that helps settle such disputes. ✅ For more visit: https://www.kashishipr.com/