Uncovering the Realm of Selection Inventions 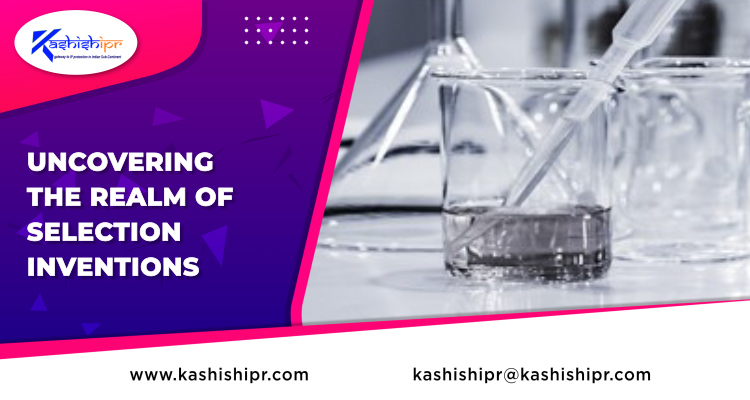 What are Selection Inventions?

The rationale behind granting monopolistic and exclusive rights over a particular invention is to reward and accredit the inventor for inventing a novel invention that is susceptible to industrial application and is not obvious to the existent state of the art. These rights are, therefore, given instead of the disclosure made by the inventor to the state, which can later be used as a public source of information to contribute to the development of the civilization.

However, selection inventions contrast with the basic idea of novelty and prior-art since they stand for those inventions, which have a specific concept that is selected from a prior concept or a larger and much more generic concept of a particular invention that has great and more advantageous properties than that of the prior disclosed concept. Therefore, a selection invention is the one, which can be found to be a part of the prior art disclosure, but it hasn’t been disclosed with individual reference therein. These are not limited to only pharmaceutical patents but extend to other premises like engineering, biotechnology, telecommunications, etc. In France, China, and Japan, selection inventions are possible in the field of mechanical engineering, while in countries like Argentina – the same is restricted to a particular condition for processes and compounds.

A typical example of this involves the pharmaceutical patents that utilize a Markush-type formula to claim a compound. A Markush-type formula has numerous radicals with wide possibilities of potential substitutes that can be chosen in its place. The combinations of all the possibilities of such radicals may lead to a greater number of compounds, some of which have neither been studied nor been described in a particular Patent Application.

To illustrate a selection patent, consider that to make an invention ‘A,’ the process utilizes a temperature ranging between 20 degrees Celsius to 100 degree Celsius and a pressure range between 20 and 60 Pa. It is later found that invention A can be produced in greater quantity if a temperature of 25 degrees is coupled with 50 Pa. The same had not been tested nor described in the prior art. Therefore, a selection patent may involve, for example, the selection of individual elements, sub-sets, or sub-ranges, which have not been explicitly disclosed previously, within a larger known set or range.

Tracing the History of Selection Doctrine

The history of the selection invention doctrine can be traced back to the case of In Re Farben Industries, back in the year 1930. However, the modern-day interpretation of this concept can be attributed to Albert Einstein, who, during the development of his theory on Photo-electricity, worked with the German Patent Office. He provided his comments as a Grade-III Expect in a case of Patent Infringement, where he discussed the facts that a patent, which cannot be used without violating the scope of another ‘ruling patent,’ is known as a ‘dependent patent.’ These dependent patents are often based on the notion of ‘selection invention,’ where a selection of a narrow region having surprising effects is made within a broader known region.

Tests Evolved for Qualifying an Invention as a Selection Invention

The fundamental principle laid down for a selection patent can be understood from the classic espousal in the landmark case of  IG Farbenindustrie (1930) 47 RPC 289 on the doctrine of allowing patents to cover old or obvious inventions wherein the new invention is founded from the selection from a class of elements. In this case, Justice Maugham J. laid down a three-step test for a selection invention to be valid as a patent, which is enumerated as follows:

Also, a three-part novelty test was devised in the case of Bleach Additive vs. Akzo as per which the following factors should be satisfied to accord patentability to an invention:

To clarify the standpoint of these kinds of inventions, the United Nations Development Programme (UNDP) issued a document entitled Guidelines for Pharmaceutical Patent Examination: Examining Pharmaceutical Patents from a Public Health Perspective (the ‘Guidelines’), in the year 2015, which was an effort to promote access to medicines, which recommended that courts and patent office should implement newly heightened patentability requirements for follow-on pharmaceutical innovation that would be uniquely stringent and largely unprecedented..

The criteria for accepting selection patents differ as per the jurisdictional requirements in each territory. Consider, for example, the EPO Guidelines for examining a patent application. It states that an application would be admissible if the criteria for patentability are complied with as well as the selection of “individual chemical compounds from a known generic formula whereby the compound selected results from the selection of specific substituents from two or more ‘lists’ of substituents given in the known generic formula. The same applies to specific mixtures resulting from the selection of individual components from lists of components making up the prior art mixture.” Therefore, as per the EPO, the selection made in a numerical range would be acceptable. A numerical range is that wherein the disclosed patent includes a range of compounds from C1-C4 and the selection of C2 is specifically made. However, the same is admissible only if:

Therefore, in the EPO, the acceptance of selection patents is founded on a fictitious concept of novelty as per which a prior disclosure is not considered to deprive the selected elements of the notion of novelty. However, such inventions are not protected in various jurisdictions like South Africa, Japan, Philippines, Singapore, New Zealand, Australia, Austria, Czech Republic, Estonia, Finland, Germany, the Netherlands, Portugal, Spain, Sweden, the UK, Belgium, Denmark, Turkey, Canada, the US, Panama, and Argentina.

However, as mentioned above, the requirements of patentability may differ. In Germany, the standard of novelty is applied very strictly, which means that an invention may be declared as admissible by the EPO but at the same time may be rejected by German Courts. In the United Kingdom, the selection invention is patentable – provided the selection must possess a special advantage judged in the context of the inventive step requirement. Furthermore, in Canada, the unexpected advantages are primarily treated as a matter of utility (industrial application) under the ‘promise doctrine’ developed by the courts; while other jurisdictions do not recognize the concept of ‘selected inventions’ through special and distinct rules, for example, in Belgium, Denmark, Estonia, Finland, Germany, Italy, Norway, Portugal, Spain, and Turkey.

Where selection patents are granted and are permissible, it means that the coverage of that patented invention may be much wider than the disclosure made. However, it also means that the proprietor of the patent would receive protection on all the embodiments of the basic patent; however, the subsequently selected elements (although protected) would be considered as not disclosed and, hence, be considered novel in the subsequent invention. This stance was rejected by the Indian Supreme Court in the landmark case of Novartis AG vs. Union of India & Others 2013 wherein the Court held that “a monopoly is granted to a private individual in exchange of the invention being made public so that, at the end of the patent term, the invention may belong to the people at large who may be benefited by it. To say that the coverage in a patent might go much beyond the disclosure thus seems to negate the fundamental rule underlying the grant of patents.”

The area of selection patents is ambiguous because different jurisdictions have different practices about the subject matter. Also, there is no uniformity in defining these inventions. Therefore, in the event of a conflict between two different jurisdictions, the appropriate decree of the court cannot be anticipated. Also, the need to develop separate rules and guidelines for such inventions may be needed to address them in specific or general circumstances, as may be needed. ✅ For more visit: https://www.kashishipr.com/