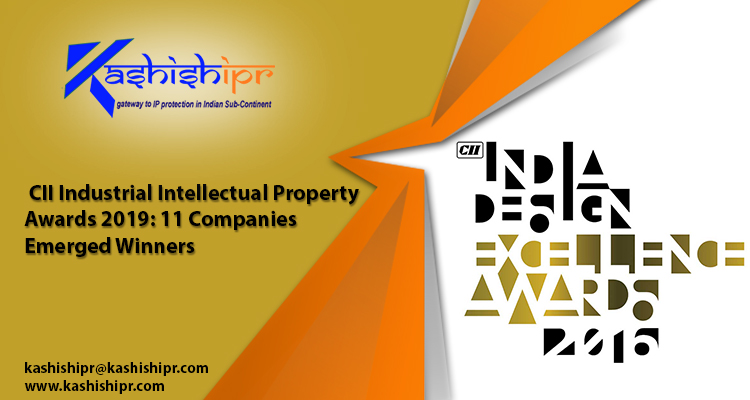 On December 4, CII Industrial Intellectual Property Awards 2019 were conferred on 11 companies for the best portfolios in Trademarks, Designs, and Patents. The awards were given at the Fifth International Intellectual Property Right (IPR) Conference, organized jointly by CII (Confederation of Indian Industry), Intellectual Property Office India, and the Department for Promotion of Industry and Internal Trade (DPDT). The theme of this conference was innovation and IP-led technology for a $5 Trillion Economy.

Recognized and awarded enterprises that have embraced Intellectual Property (IP) generation and protection to enhance their business and economic growth, the purpose of these awards is to:

Each award included a trophy and a certificate. Moreover, the selection of awardees was made by an eminent jury chaired by the former Director-General of CSIR (Council of Scientific and Industrial Research), Dr.Raghunath Anant Mashelkar.

Dr.Mashelkar, while speaking at the award ceremony, stressed upon the requirement to bring as more as possible companies within the framework of this exercise so that there would be a remarkable awareness of the profits of creating and using IP. He said that just creating IP is not sufficient, and thus, there is a need to explore its commercialization as well. The creation of IP in the form of new products or services without any tangible benefits is not of much use, he added.

Winners of 2019’s CII Industrial IP Awards include companies like Tata Consultancy Services (TCS), Godrej & Boyce, and others that are at the forefront of IP creation and commercialization.

Under the Start-ups category, there were five awards – three in life science and two in engineering. SigTuple, this time winner of the best patents portfolio award under the start-ups engineering group, had won this award in 2018 also. However, City Explorers – the achiever of the best trademark award under this category had made its debut in 2019. Similarly, Shashvi Remedies that fall in the life science category had won the award for the first time. Prantae Solutions had won both trademark and design awards under the Start-ups life science category. It was a winner in 2018 also.

Among the medium enterprises, one award each in engineering and life science was awarded. RDL Technologies, which received the award for its patents portfolio in engineering, was the first-time winner, whereas Vyome Therapeutics in life science had got this award in last year’s award ceremony also.

The large companies segment saw six awards going to TCS, Godrej & Boyce, UPL, and more. TCS won the best patent award for the fourth time. Godrej & Boyce won the awards for its trademark and design. UPL was awarded for its two portfolios – trademarks and patents – in the life science category. For more visit: https://www.kashishipr.com/