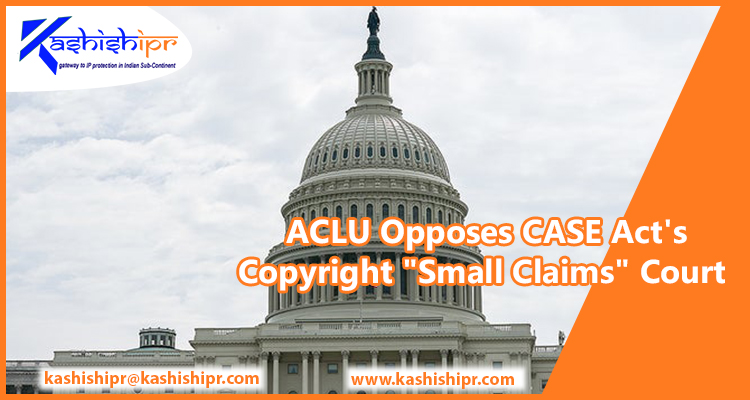 The American Civil Liberties Union (ACLU) recently said that the CASE Act, which would constitute a copyright “small claims” court, could be disastrous for free speech.

The Copyright Alternative in the Small Claims Enforcement Act of 2019 (CASE Act of 2019), which was introduced on 1st May 2019 in the US House of Representatives by Rep. Hakeem Jeffries, would soon establish the Copyright Claims Board in the US Copyright Office. The idea on which this reform focuses is to facilitate independent creators with a cheaper and easier way in comparison to the federal district court litigation to safeguard their Intellectual Property (IP).

Nonetheless, ACLU said that though the idea emphasizes this aspect, yet there are unintended consequences, which can make the legislation a disaster for free speech. It also added that the bill is fixable, but must be fixed.

Kate Ruane, ACLU’s senior legislative counsel, said that they welcome and support the goal of removing or reforming some barriers that could prevent right holders from defending their copyrighted works, but the US Congress first needs to revise the bill to ensure that there are appropriate safeguards to protect the freedom of speech and due process.

Ruane wrote that the last thing the US Congress should be doing at this moment is providing another government party with broad powers to function without proper legal oversight.The Copyright Claims Board will make mistakes, and the system will get abused. Individuals or businesses who are fairly or unknowingly using copyrighted works could forcefully have to pay a fine of $30,000 for these mistakes. The addition of another layer of government in the process makes ACLU unhappy.

She further wrote that ACLU is worried about having a government with limited oversight about determining what is fair use and safeguarded speech displaying that affected parties could include almost every internet surfer. For instance, those who have ever shared a photo or blog without knowing if they had appropriate permission or even those have posted videos of themselves singing on the latest pop song. With no court to correct the mistakes, the amendment will suffer.

The News Media Alliance, Authors Guild, RIAA, SAG-AFTRA, and the Copyright Alliance are among the groups supporting the bill; whereas fair use standard-bearer Public Knowledge and the Consumer Technology Association, which makes the technology that enables the distribution of intellectual property, fair use and foul, in addition to ACLU, are the opponents.