Can you Play Copyrighted Music in Restaurants? 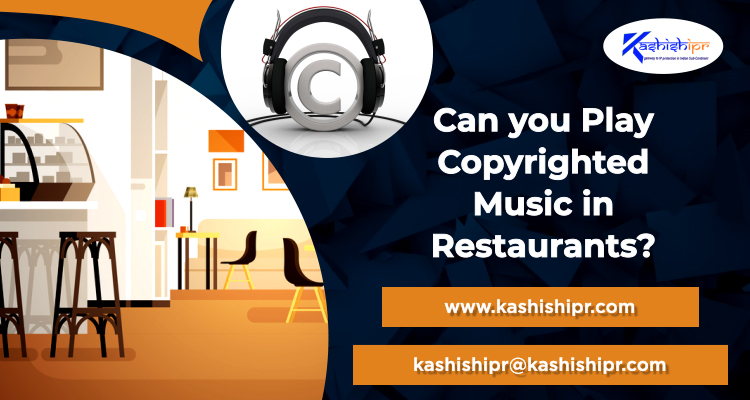 When we visit a restaurant or cafe, listening to music adds to the overall ambiance and experience. However, have you ever wondered whether the owners of restaurants require permission to play those songs at their premises? The answer is yes. This is because most songs are subject to Copyright Protection. Playing a song at a restaurant or cafe, which are by nature public spaces, requires the permission of the copyright holder. Do you know why? It is because Copyright Law gives copyright holders some specific exclusive rights. The owner of a song’s copyright controls the right to make public performances of that song. Playing a record of that song in one’s restaurant is considered to be a ‘public performance.’  So, playing a copyrighted song without proper permission could amount to Copyright Infringement.

A ‘public performance’ is the one that occurs either in a public place where people gather for transmission to the public, for example, radio or TV broadcasts and via the internet.

Performance Rights Organizations (PROs) usually control public performance licenses. Their role is to represent songwriters and publishers and negotiate ‘blanket’ licenses to television and radio stations, retail stores, restaurants and bars, music venues – anywhere that would be playing background music to which public audience can listen. They are also in charge of monitoring this space and ensuring all of these organizations comply with the correct laws. They then pay performance royalties to the songwriters and publishers based on the frequency of usage of each copyrighted work.

PROs ensure that performers and record companies are being fairly paid for the use of their music. After the deduction of running costs, all PROs license fee income is distributed to the particular PRO’s diverse membership, which includes all the major record labels, several independent labels, and thousands of performers and musicians. Similarly, after the deduction of running costs, the PRO ensures that songwriters, composers, and music publishers are paid fairly and proficiently. There are many methods to track the music being played in different environments, such as censuses on business, tracking radio play, downloads, and streams.

A common misconception among restaurants, cafes, and bar owners is that if they are paying for a subscription to a streaming service such as Spotify or Pandora, they tend to believe they are paying the appropriate fees. It is, however, a false piece of information. The restaurant owners must pay a fee to a PRO or to a music service that has paid the appropriate fees on their behalf to be able to play the music legally. They cannot play copyrighted music (basically any song by an artist that is signed by a label) in their restaurant or bar unless they do so.

Licensing fees are generally paid yearly and can vary depending on several factors, including:

There are various options for paying licensing fees, which are as follows:

The song “Happy Birthday to You” is probably the most popular one worldwide. Each year, it generates USD 02 million in royalties for Warner/Chappell music. In 2015, a US court held that Warner/Chappell could not prove that it held a copyright on the song. Warner/Chappell agreed to settle a class-action lawsuit challenging these fees. Warner had to pay more than USD 14 million to several people and entities who had paid licensing fees to play the song since 1949.

In 1995, the American Society of Composers, Authors, and Publishers (ASCAP) asked the American Camping Association to pay royalties for campfire songs sung at any of their 2300 camps. ASCAP demanded girl scouts to be engaging in ‘public performances of the copyrighted works. However, after facing public backlash, ASCAP claimed that it did not intend to bring a lawsuit against girl scouts.

While it may seem like a hassle to obtain a license when one can just plug in and play music from his or her device, it is a hassle that is worth the time and money. A small investment in a paid music licensing service can be a good solution for restaurants to stay within the legal limits of copyright. Most PROs have representatives who scour retail establishments, find businesses that are playing recorded or live music, and then demand that these businesses enter into a license or file an infringement suit.

In case the restaurant does not wish to spend on a license, another option is to play copyright-free music, which can be done by playing music that has fallen into the public domain due to copyright expiration. In addition to public domain recordings, there is a large collection of recorded music that is designed specifically to bypass the public performance fees. This music is also often used by filmmakers who can’t afford hefty license fees. Sometimes people who work at a restaurant compose their music. A restaurant can play original music for no cost if it has the permission of the copyright owner, who would be the composer in this situation. Or else, the restaurant can arrange live performances without a fee if the band plays its music and does not charge additional fees for the performance right.

In any case, whenever someone is planning to open a restaurant, cafe, or similar establishment with the desire of enhancing the ambiance of the place by adding music to it, it is necessary to obtain a license for playing copyrighted music to avoid getting into legal hassles. ✅ For more visit: https://www.kashishipr.com/