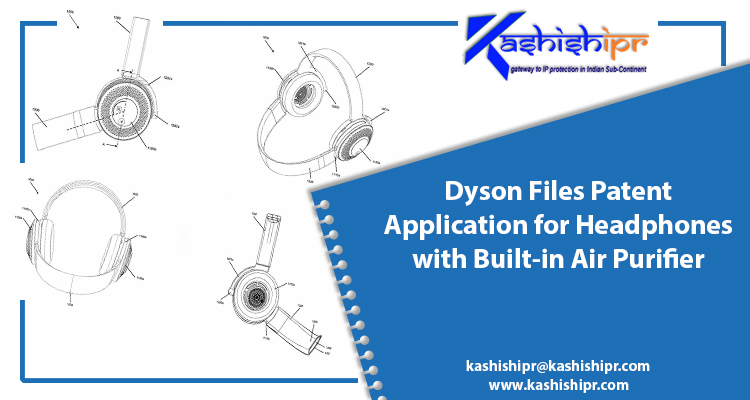 Dyson Ltd, a British technology company that designs and manufactures household appliances such as vacuum cleaners, air purifiers, etc., has applied for the Patent Registration of a new pair of headphones with a built-in air purifier.

Filed with the UK’s Intellectual Property Office, the company’s patent application describes a pair of headphones with advanced technology-based air filters built into its ear cups. Diagrams provided in the application showcase a band that sits across the wearer’s mouth to serve them with clean air and can be folded away when not in use.

Dayson already deals in producing a wide variety of air purifiers for home, but these undoubtedly don’t provide much help when the wearer is out or about. Besides, people in almost all parts of the world care enough to wear face masks to be safe against harms due to pollution. In addition to highlighting these facts, the company’s patent stated that this is why there’s a crucial need for a portable device that could more effectively filter out pollutants, even if it comes with the stigma of partially covering the wearer’s face. It also claimed that the new device would help in combating the harmful effects of air pollution in several cities worldwide.

Dyson’s Patent Application noted that the ear cups include motors that spin at near about 12,000 RPM to draw in around 1.4 liters of air per second, which give an idea like it could produce a fair bit of noise. With 12,000 RPM impeller and one motor on each side of the wearer’s head, it sounds that these units would feature active noise canceling (ANC). However, whether or not the motor’s noise will be a distraction to close coworkers and commuters is not clear. And when it comes to the appearance of the wearable air purifier, the front strip designed to direct air towards the nose and mouth may be more attention-getter as compared to standard antiviral mask.

As it is just a patent, a product of this type isn’t guaranteed. Nevertheless, Dyson has been working on wearable pollution-beating headphones to purify the air around the wearer for over a year. So, it appears that this could soon become a reality. Furthermore, the statistics indicate that the device may be something that you could not wear every day and everywhere. But, it can be one that would be useful to avoid illness and damages to lungs on flights and in polluted areas, and that flies off the shelf at the time of media-hyped events such as the current coronavirus outbreak. ✅ For more visit: https://www.kashishipr.com/