Patents in Pharmaceutical Industry in India 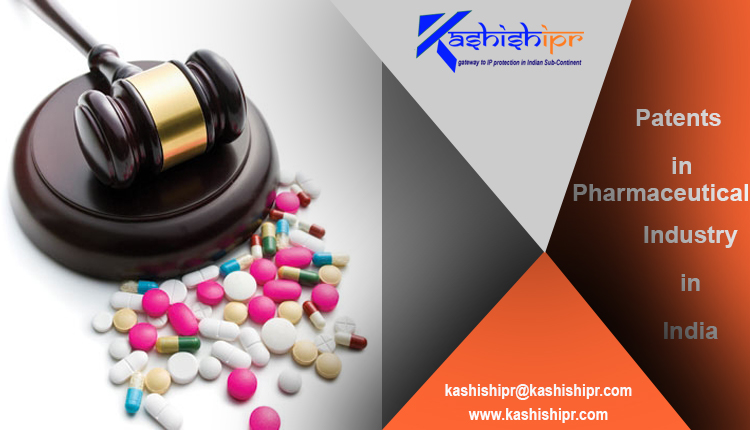 In today’s cut-throat competitive era, the pharma industry is emerging as one of the most profound ‘knowledge-driven’ sectors. As pharmaceutical researches are remarkably unpredictable and expensive, it is imperative to protect their outcomes, which can be in the form of a new and inventive product or process. Obtaining patent rights for the invented products or processes is the best method that can help pharmaceutical companies to prevent any unauthorized commercial use of their inventions. Patents, copyrights, trademarks, and geographical indication are some forms of Intellectual Property Rights  (IPR). These are the rights derived to protect the Intellectual Property (IP), which is a type of intangible property created with human efforts and intellect. Patents, out of all these forms of IPR, are considered valuable to protect assets in the pharmaceutical industry.

Patent on a Drug

In the pharmaceutical industry, a patent is an IPR granted by the government to the inventor for the protection of his invention, which can be a drug or process to produce it. Note that the patent provides solutions even for several technical problems, but for getting patented, the ideas need to satisfy the criteria of patentability.

As per the Indian patent law, an invention is patentable if it covers a new product or process that meets the following requirements:

i) Newness/ uniqueness: The subject-matter must be unique, i.e., before the date of filing, it should neither be published in any document nor be used anywhere in the world.

ii) Inventive: The invention should involve features that make it non-obvious even to skilled persons. For instance – it should have technical advancements over the existing knowledge or economic significance or both.

iii) Industrial Applicability: The Invention should be capable of getting fit into the relevant industry. For example – a new method of excluding tumor cells from the patient’s body is not applicable industrially and thus, not patented.

As discussed above, the pharma industry is an intense ‘knowledge-driven’ sector, and thus, the inventors in this sector need to be meticulous about patenting their inventions. It will be beneficial for not just the companies but also the consumers. Likewise, in other industries, patents that pertain to this sector are also country-specific. According to the Indian Patent Office, pharmaceutical patents lie under the following categories:

These are the patents that claim a drug compound as per its chemical structure and are known as Markush type claims. Intended to provide the broadest protection to the inventor of a drug, these prevent other companies from preparing a similar drug. No one is allowed to produce or sell any formulation involving this drug until the granted patent expires.

Drug synergy takes place when two or more drugs interact with each other in a way that it magnifies or enhances the effects of those drugs. The patent law of India says that the inventor can obtain protection for the new synergistic combinations of his drugs.

These patents are related to the techniques used to resolve specific technology-based problems, including stabilization, increase in the solubility, taste masking, etc. The inventors can stop others from using the same approaches as they can claim the taste-masked formulation.

Polymorphs refer to the different crystal structures or physical forms of an already known compound. Companies produce them to increase the stability or reduce the impurities of their existing compounds. These types of patents allow innovative firms to protect the improved versions of their original drugs.

Rather than claiming the products, the process patents emphasize the process of producing a particular product. Since 1960, the Indian process patent has been bestowing the inventors with the freedom to get the same product patented as long as the process used to create it is novel.

Benefits of Patents in Pharmaceutical Industry

The Indian patent law is an example of the significant patent legislation aiming at balancing the interests of both – the consumers and the inventors. In the present times, the owners can file the Patent Application for a wide range of pharmaceutical products and processes. However, before filing, the researchers should cautiously consider the criteria of patentability and types of patents that best suit their pharmaceutical products or processes. For more visit: https://www.kashishipr.com/