Someone Attempts to Trademark a Slogan “OK Boomer” With USPTO 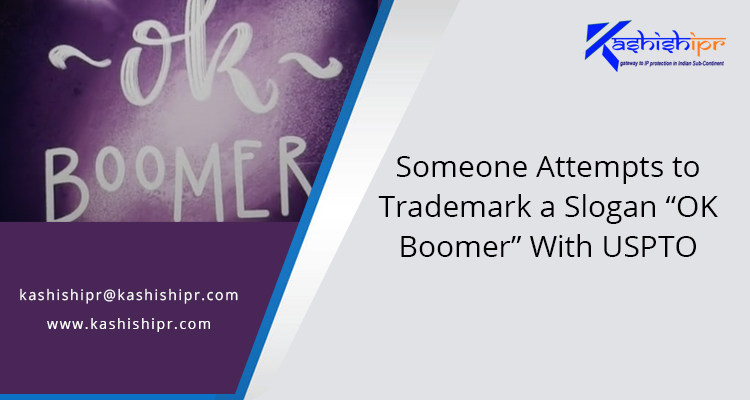 As the slogan “OK Boomer” has gained remarkable attention in the mainstream beyond Generation Z, someone has applied for the Trademark Registration of “OK Boomer” with the United States Patent and Trademark Office (USPTO).

TikTok, the incredibly popular video-sharing app, has emerged as a launchpad for various viral memes and internet trends, including “OK Boomer” to diss the older generation. Someone is attempting to capitalize on this latest internet meme spawned from Generation Z by filing a Trademark Application to get it registered with the USPTO.

Teens have been using the phrase “OK Boomer” to push fun at old generations for being and remaining out-of-touch and controlled it as a rallying cry over the internet, especially TikTok. The slogan has obtained attention in the mainstream – thanks to articles – in news outlets, encompassing profile from the New York Times’ Taylor Lorenz.

Hence, the fact that people are finding ways to extract profit from the popularity of the slogan or phrase beyond framing social media content or receiving laughs out of their friends should not come as a surprise.

The application filed on 31st October 2019 with the US Patent and Trademark Office (USPTO) shows that someone is trying to turn “OK Boomer” into a Registered Trademark. The $275 application, which aims to trademark “sweaters, shirts, accessories, and shorts,” appeared sporting the two-word slogan.

The person behind the recent trademark application isn’t the only individual or first one with the idea of getting merchandise “OK Boomer” registered. A 19-year-old girl, Shannon O’Connor, recently announced that she has been marketing hoodies and shirts with “OK Boomer” in style similar to the font on the plastic shopping bags, which read “thank you.” She further continued by saying that since promoting her Bonfire merchandise on TikTok, the girl had made around $25,000 in sales. Indeed, not just Shannon but many other sellers have also been using the phrase “OK Boomer” to sell buttons and stickers for iPhone cases and coffee mugs.

Indeed, the latest filing with the USPTO is just a trademark application, and in general, the process of obtaining Trademark Protection for anything by officially registering it takes more than a year. Besides, considering that “OK Boomer” has already seemed on merchandise and in the current culture, it is a bit unclear how successful the trademark application would prove.

A case that could provide an idea regarding the “OK Boomer” trademark potential is Lebron James’ recent endeavor to trademark the two-word phrase – “Taco Tuesday.” The USPTO rejected the basketball star’s trademark application stating that the phrase is a “commonplace term, expression, or message” used widely by several sources that convey a familiar and well-recognized sentiment or concept. For more visit: https://www.kashishipr.com/