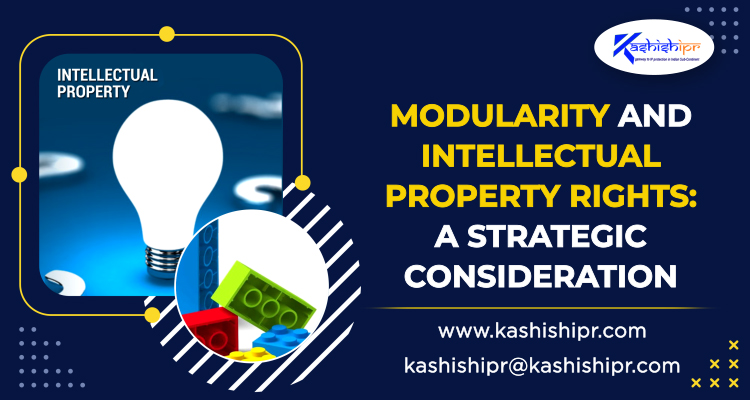 The concept of modularity has become a common debate due to the vast outreach of consumers and industrial growth. The concept focuses on the notion of distributed innovation in the contemporary global economy.

Modularity allows firms and companies with complex technical systems to divide the components therein, called the modules, which are capable of being designed independently, but to function, they need to be looked at together as a whole. Consider a scenario where an architect modeling the allocation of Intellectual Property Rights (IPRs) decides to separate a module, which the firm owns and desires to keep a secret, and creates another module for disclosure to a certain audience (customers), along with a module that it decides to license as an open-source code according to the GPL. The act of modularity requires considering each IPR as a separate element in its modular form and injunction with one another to achieve the final product.

A much rather practical example of modularity is that of the M-Systems, a subsidiary of the leading seller of flash memory, namely SanDisk. As their sales grew, the customers increasingly started demanding access and the right to modify the ‘driver’ software, which would allow the flash memory to interoperate with the host device. Since M-Systems wanted to safeguard the sensitive Intellectual Property (IP), which was an intrinsic part of the driver, they strategically introduced an IP-modular architecture by splitting the driver itself into two modules, based on IP considerations, namely the flash management code and the remaining ‘thin’ driver. They placed the said flash management code on the physical device itself and sought protection through copyright and the law on secrecy, and published the thin driver as open-source software for consumer use. Redesigning the technical modules of the IP structure not only allowed M-Systems to reconcile customer demands for incorporating openness with their value appropriation strategy, but it also allowed them to control the original driver and maintain that beneficial edge in the market.

When it comes to a modular system, the following key elements need to be taken into careful consideration:

Such modularity may not be specific only to formal IPRs like patents, copyright, industrial designs, or licensing contracts but also extend to informal forms of IPRs like trade secrets, etc., as has also been observed above. Consider the example of vehicles that utilize the concept of modularity, the engine that is a patented invention may be made in Country A, the base framework may be made in country B, the design and ornamental features of the car may be made in country C, and the key attributes may be confined as a trade secret in country D. Each employee operating within a module may not possess the requisite knowledge for another module of which it does not form a part.

Why Companies with IP Assets Choose to Modularize?

IP modularity is a crucial concept from the point of view of firms that manage their IPR assets across different boundaries. The firms that prefer an open way of innovation or the ones that primarily focus on mergers and acquisitions as well as those seeking to share their IP assets with external actors like suppliers, employees, and alliance partners, license IP from outsiders, and want to protect their IP assets from imitation should consider modularity. The reason to consider the same lies in the positive aspect of modularity, which includes:

Since modular technology enables flexibility in the existent technical architecture, it also helps to introduce a certain degree of flexibility to come up with new technology components and support them. Hence, it also enables an easy upgrade of technology for both the customers and the producers by increasing user value through a reduced cost of switching and product cost and maintaining a low producer margin.

The fundamental concern that arises is that IP assets are divided and segregated into different parts. Many a time, these different parts may be outsourced for production to the external suppliers or even alliance partners, which requires sharing of knowledge that the employee may need to create a challenging object suitable to the market. In such a scenario, modularity will enable each participant in the process to access only that bit of knowledge that may be relevant to the module it designs or builds upon. Thus, if the information is diffused to a different set of employees keeping in mind the segregation made by modularity, IP assets can be protected in the long run by preventing the exchange of information between each of these different modules. It can be visualized in the form of a puzzle where each modular segment will know a part of the puzzle, but none would be able to restructure the whole. Therefore, IP assets can be safeguarded predominantly by dividing the product or process into different task modules and allocating those modules to separate, non-communicating agents.

As technologies are becoming complex with time, the reconciliation of technical architectures with IPR concerns is becoming an increasingly important problem in knowledge-intensive firms. IP modularity enables a company to reap the benefits of distributed innovation while conversely, it also reduces the cost of transaction and the costs of opportunism on the part of suppliers, partners, and employees. In this manner, IP modularity overcomes the intrinsic conflict between distributed value creation and value appropriation in an increasingly complex and fragmented technological space. It is for this reason that it deserves the attention of IP strategists and managers of assets.

As has been observed above, modularity is a means of partitioning and segregating technical knowledge about a particular product or process. When a state-approved IPR is ineffective or costly to enforce, modularity can be utilized to hide or safeguard information and thus protect the corresponding IPR. ✅ For more visit: https://www.kashishipr.com/