Who owns the IP Rights in AI-Created Works? 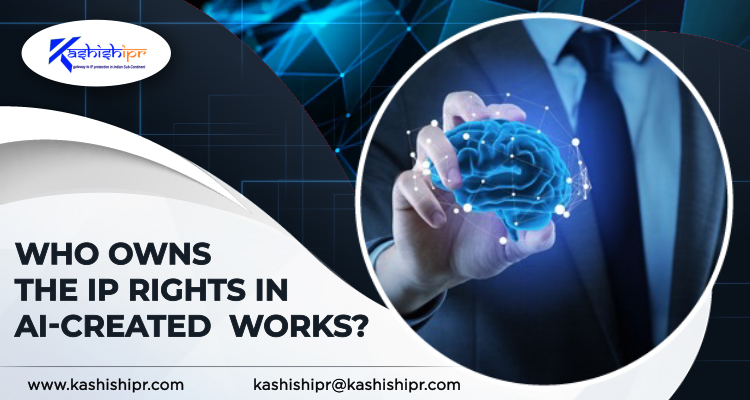 Artificial intelligence (AI) is increasingly driving crucial developments in technology and businesses. It is being employed across a wide range of industries with an impact on almost every aspect of the creation. The availability of large amounts of training data and the advances in affordable high computing power is fueling AI’s growth.

Today, the tasks that AI can perform were unimaginable a few years ago. Whether it is creating music, original artwork, literature, or even new technology, AI has achieved it all. However, a vital question that arises is. “Who owns the Intellectual Property Rights (IPRs) in the works created by AI?” Is it the person, who bought/put the AI to use to create the particular result, or is it the inventor of the AI, or better yet, is the AI in itself the owner of such creations? Before our current legal questions can find definite answers to these questions, it is imperative to understand the various possibilities, their complexities, and implications.

What is Artificial Intelligence?

AI is generally considered to be a discipline of computer science aimed at developing machines and systems that can carry out tasks considered to require human intelligence. Machine learning and deep learning are two subsets of AI. In recent years, with the development of new neural network techniques and hardware, AI is usually perceived as a synonym for “deep supervised machine learning.”

Machine learning uses examples of input and expected output (so-called ‘structured data’ or ‘training data’) to continually improve and make decisions without being programmed how to do so in a step-by-step sequence of instructions. This approach mimics the actual biological cognition: a child learns to recognize objects (such as cups) from examples of the same objects (such as various kinds of cups). Today, the applications of machine learning are widespread, including email spam filtering, machine translation, voice, text, and image recognition.

Earlier, computer-generated works used to rely heavily on the inputs of the programmer, and the machine was, at the most, an instrument or tool. Over time, the technological revolution has led to the rapid development of machine learning software, a subset of AI that produces autonomous systems capable of learning without being programmed specifically by a human.

A computer program developed for machine learning purposes has a built-in algorithm that allows it to learn from data input and to evolve and make future decisions, which may be either directed or independent. When applied to art, music, and literary works, machine learning algorithms are learning from input provided by programmers. They learn from these data to generate a new piece of work, making independent decisions throughout the process to determine what the new work looks like exactly. A vital feature for this type of AI is that while programmers can set parameters, the work is generated by the computer program itself – referred to as a neural network – in a process akin to the thought process of humans.

In 2016, a group of museums and researchers in the Netherlands unveiled a portrait titled ‘The Next Rembrandt,’ a new artwork generated by a computer that had analyzed thousands of works by the 17th-century Dutch artist Rembrandt Harmenszoon van Rijn. A short novel written by a Japanese computer program in 2016 reached the second round of a national literary prize. In another instance, the Google-owned AI Company Deep Mind has created software that can generate music by listening to recordings. Other projects have seen computers write poems, edit photographs, and even compose a musical.

For determining what constitutes a creative work eligible for Copyright Protection, most national copyright regimes rely on the concepts of authorship and originality, among others.

For a work to be protected by copyright – there needs to be creative involvement on the part of an ‘author.’ In the European Union, there is no exact definition of an ‘author,’ but case-law in civil law nations, such as France, Germany, and Spain have established that only human creations are protected. The same essentially means that works reflect the author’s personality. In common-law nations such as the USA, UK, Canada, Australia, to name a few, the Copyright Law follows the utilitarian theory, according to which incentives and rewards for the creation of works are provided in exchange for access by the public, as a matter of social welfare. Under this theory, personality is not as central to the notion of authorship, suggesting that a door might be left open for non-human authors. In 2016, there was a selfie taken by a monkey (popularly known as the ‘monkey selfie case’) where it was held that there could be no copyright in pictures taken by a monkey, precisely because the pictures were taken without any human intervention. The main issue is that copyright can only be granted to a human.

The UK’s Copyright Designs and Patents Act, 1988 somewhat provides a solution to this problem. Section 9(3) states that “the author shall be taken to be the person by whom the arrangements necessary for the creation of the work are undertaken.”

This provision assumes some form of creative intervention by a human and not autonomous generation by a computer program alone. It creates legal fiction.

When we talk of originality, it is widely understood under copyright law that a work is original if it reflects the “author’s intellectual creation,” i.e., the expression of the author’s personal touch and the result of free creative choices. When we talk in the context of the originality of AI-generated works, the question, which then arises, is – Does the AI make free and creative choices? Since an AI is implemented by computational means, some argue that the AI is not making a free choice but rather building upon what has already been programmed into it by the programmer. On the other hand, some strongly advocate that AI indeed makes its own creative choices. These areas are still exceedingly new and grey to reach a definite conclusion.

Patents on AI made Inventions

Invention by AI is the future of innovation. Inventing computers are routinely used to create new technologies, such as BMW’s recent design of self-driving automobiles. Few people believe that it is only a matter of time before AI is responsible for the majority of inventions in the world. The same raises the issue of how the Patent System should treat the technologies created solely by AI with insufficient human engagement to recognize a human inventor. The question of whether, and to whom, patents can be granted for AI inventions is yet to be addressed by the legislature and courts.

A primary requirement for inventorship is making a significant contribution to the invention. In the case of TS Holdings, Inc. vs. Schwab, Mr. Barry Schwab was hired to create a video product to be used in automobile marketing. Schwab had obtained a patent on the subsequent invention, and his employer later alleged that he should be included as an inventor. The court disagreed, rejecting arguments that Schwab’s employer was an inventor because he “financed the reduction to practice” and was the initial reason why Schwab began work on the invention. Because providing monetary support and instructing others to create new technology – are not sufficient to constitute an invention, Schwab’s employer was not an inventor.

The case mentioned above establishes that a human using inventing AI is not an inventor for purposes of Patent Law. To initiate AI invention, a person may input seed information, including existing technologies – for instance, for neural networks or relevant parameters to be optimized. Such acts are seen as merely providing AI with access to existing knowledge in the field. Furthermore, the fact that a person – finances, owns, or operates the AI is insufficient to qualify that person as an inventor. In such situations, a person may be responsible for an invention, but they have not invented a new technology. A primary goal of the patent system is the dissemination of technological advances. If AI patents are refused, it will lead to software creators not disclosing their AI inventions themselves and rather keeping them a trade secret. The same will certainly go against the primary goal of the patent regime. Unfortunately, most legal systems are not yet equipped to answer these questions in black and white.

The current position of AI under IP is problematic, wherein recognition of works generated by AI is a step towards the future, but its implementation is the real problem. As AI digs deeper and deeper into more of our interactions, we want to reflect deeply on what sets human creativity and ingenuity apart from the work of the machines we are setting forth into the world. IP law was created to reward the creation of novel ideas and to pass them into the public domain after a limited period. So, to what extent do we want to reward machine creation of ideas or discredit them, particularly in comparison with traditional human creations? Views on this stay starkly divided. Some believe that IPRs should be granted to the owner of the IP, at whose behest the work is generated. On the other hand, some argue that this would go against the very core of the IP system and provide a possible solution that AI-generated works should remain in the public domain and be treated as a separate class. However, then again, the question arises as to the liability in case of infringement by AI. Who would we hold accountable if AI infringes upon an invention or copyright? Is it the creator, the user, or the AI itself? Moreover, how would we ‘punish’ AI?  It is not possible to pin the entire blame on the inventor since AI is the self-learning machine, and the inventor may never have envisaged the infringing situation. Few have even suggested treating AI as ‘minors’ under law, with the owner or inventor as the legal guardian being responsible for any illegal act by AI. All of these arguments, on the one hand, make sense in the context of AI but, on the other hand, have several loopholes and unanswered questions. The world will only have to wait and see how jurisdictions integrate AI-generated works into their legal systems with time. ✅ For more visit: https://www.kashishipr.com/