Determination of Equivalents in a Patent Application 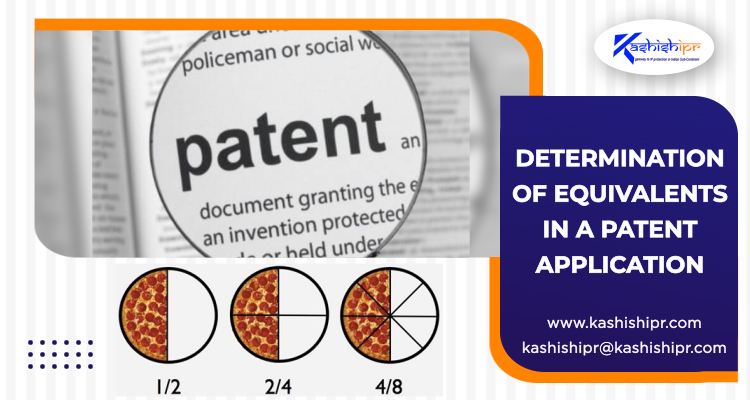 The doctrine stipulates that the scope of a patent is not confined to the literal terms laid in the claims; instead, it embraces all the equivalents to the claims described in the said application. In the absence of such a doctrine, the true essence of the patent and the monopolistic rights would never be realized to their full potential as it would enable the competitors to make unimportant changes to the invention to claim another set of rights altogether. The doctrine embraces fairness while affording appropriate protection to the proprietor of the rights ensuing from the patent.

The ‘Doctrine of Equivalence’ states that there are chances of non-literal infringement if an element of an accused product or service and a claimed element of a patented invention are found to be legally equivalent. It broadens the ambit of the patentee’s right as it enables him to claim those rights that are inconsequential alterations to the invention, which may not be expressly covered in the original claims. Therefore, it prevents fraudulent acts of substituting obvious equivalents for those elements in the claims that are not covered due to the limitation of language. However, it does not include within itself those equivalents that belong to the state of the art to arbitrarily extend the scope of the patent.

What is an Equivalent?

As per Graver Tank & Mfg. Co vs. Linde Air Prods Co, a patentee may invoke this doctrine to proceed against the producer of a device if “it performs substantially the same function in substantially the same way to obtain the same result,” as has also been mentioned above. Here, the alleged infringer’s invention will be looked at as a whole without bifurcating the claims. However, the courts took a turn in their approach after this case and introduced a certain degree of uncertainty in an attempt to evolve the doctrine.

In the Warner-Jenkinson case, the court proposed that “equivalency must be determined against the context of the patent, the prior art, and the particular circumstances of the case.” The court shall look into greater depths while assessing the purpose of each ingredient used, the qualities it possesses when it interacts with other components, etc.

How to Determine Whether an Element is an Equivalent?

For discovering whether an element is an equivalent of another, the following two factors shall be taken into consideration:

As mentioned above, to assess the test of equivalence, the following legal tests have been evolved:

Inherent Defects and Issues Emanating from the Doctrine

The doctrine of equivalence suffers from some defects. It is criticized for the lack of certainty since there is no precise legislative framework. The doctrine has been evolving since the time of its inception, yet it has bred ambiguities. Many courts have addressed that the tests laid above may not suffice the requirement to adjudge equivalence.

The doctrine can have far-reaching effects since it may lead to broadening of claims despite the checks and balances held through the determination of equivalent claims and bars on equivalents. It may so happen that in furtherance of uncovering non-literal infringement, the doctrine may help envelop even those elements that may only be impliedly found in the Patent Application. It is directly in conflict with the public notice function since once a patent is granted, the public is put on notice as to what is protected and what is not; thereby, permitting exploration of what is not covered within the granted application. If, after reviewing the application, an invention is created that falls beyond the scope of the invention; but, which is later found to be infringing due to incidental non-literal overlapping, the public-notice function fails. The same is a concern that is also often brought up by those inventors who try to design around the invention in good faith.

The doctrine of equivalence may suffer from the previously mentioned drawbacks; however, its importance cannot be denied. It is of significant importance to successfully plead a case of non-literal infringements since it helps restore the balance of monopolistic rights and public disclosure. It helps overcome the impact of overemphasizing literal terms and words used in a patent application to uncover the essence of the same to understand its scope and nature. In the absence of such an invention, the inventor would be deterred to make a complete disclosure since it would be easier to ride on the patented invention by making unsubstantial changes and twisting the bare wordings of the claimed invention. ✅ For more visit: https://www.kashishipr.com/